There’s a lot to take into consideration when you’re looking for the best AUS vs IND dream11 team. Today, We are going to discuss AUS vs IND 3rd T20 Match news, AUS vs IND playing 11, AUS vs IND fantasy cricket prediction, and dream11 Expert data. The series is called India tour of Australia 2020-21 in dream11 leagues.

Rahul was the orange cap winner in the IPL 2020 and has been playing consistently well in T20s over the last 2 years. He’s by far the safest option for your team and is a must pick for Aus vs Ind 3rd T20 match.

If Finch continues to rest due to an injury and Wade opens the innings, he’s a must pick since he has been playing on these grounds since several years in the BBL and has been a huge hit for the Hobart Hurricanes. If Wade opens, he’s a safe choice to keep and a must pick.

Coming at No.4, Samsom has just been playing cameos and can try in GL especially if you plan to drop any one of the top 3 batsmen from India. As they’ve won the series, he could promote to No.3 as well. Risky pick for SL, do try in GL.

Everyone is aware about how classy Kohli is, but hasn’t been playing as well as one would expect from him, in T20s. Highly risky to drop him from SL and he is a must pick if India is chasing. Try dropping him from Aus vs Ind dream11 GL as he could shuffle the batting order a bit after having won the series.

Another exceptional and in-form batsman is Smith, who has the onus of carrying the team in the absence of Warner and Finch at the top. He has been consistent in this tour and has striked the ball well. He is a must pick.

Shikhar was consistent during the IPL and notch up centuries as well, but registered ducks as well. He’s a hit or miss player and can be avoided in risky SL teams, but if you’re a safe player, do take him in your team.

Iyer’s batting order is flexible depending on the situation of the team. He has been successful for Delhi Capitals in the last 2 years and showed fine form in the previous game towards the end of the innings. Can be tried in GL for today match.

A likely possibility of opening with Stoinis in this game if Finch continues to be unavailable, and Short could make way for a middle-order batsman giving Stoinis and Wade the chance to open in this final match of the T20I series. If Short continues to play, he’s been a hit in BBL over the years and has done well in Sydney too. Do not miss out on him if he does play in Aus vs Ind today match.

Haardik’s currently playing only as a batsman and won’t be bowling. He has loved to bat in this tour and has proven the selectors right in keeping him in the squad even as just a batsman. He has been doing well and finishing games amazingly. He’s one of the safest all rounder option to keep in 3rd t20 match team.

Maxwell hasn’t played well in T20s since a very long time now and is still looking to get his T20 form back with the bat especially after the worst possible IPL season for him. He can be left out in SL but the day he fires, he goes big. A hit or miss player. Good pick for Aus vs Ind dream11 GL.

Due to his injury, Stoinis is not being used as a bowling option. If he opens, he’s in a must pick as he loves to open and has been a huge success in BBL over the years as an opener.

In the first game, Henriques picked up 3 wickets but didn’t get a 2nd over in the 2nd game. He’s a risky pick in your side if he comes purely as a batsman. He can be avoided in SL but do try him in GL since he’s being used as a bowling option.

Washington Sundar (IND) (5 down and 4 overs)

Sundar has been bowling tight lengths but not getting any points for the Fantasy users. He can be left out from your Aus vs Ind dream11 teams.

Sams has been a purple cap winner for two years straight in BBL on these grounds and has done really well. He is low on confidence after the IPL season he had but if the Aussies bowl first, he can be a very crucial GL punt pick.

Natarajan impressed everyone with the way he bowled in the IPL, and has proved his worth in his debut series against the mighty Aussies. He has proven to become one of the best death bowlers in the circuit and he is a must pick in your Aus vs Ind 3rd T20 teams.

Chahal came in as a concussion substitute in the first game and got the Man of the Match award. Surely shows a quality player’s ability with the ball. Sydney pitches aren’t very friendly to spinners as such but he can do well. A good pick but can be left out in risky SL teams.

Tye started his attack well and then one no ball changed the entire course of his spell. He is a wicket taking bowler but goes for plenty too. Due to the selection percentage, he could be left out from SL, but do try him as a normal pick in Aus vs Ind dream11 GL teams.

Swepson has been a great support from one end to build pressure on the batsmen who give away wicket to the bowlers bowling from the other end. He will atleast fetch 25 points.

He has been bowling just 2 overs but giving points only by catches on the field.

Chahar has to use swing which isn’t being offer much in Sydney. But, he is a good powerplay bowler and can get atleast 25 points for the team. Again, a risky pick and can be avoided in Aus vs Ind dream11 SL atleast.

Thakur could be expensive but ends up picking atleast one wicket. He bowled well in the only ODI he played in this tour as well and can give an easy 25 points atleast and also some runs towards the end with the bat if needed.

Leg spinners against Virat has been a huge success over the years for the bowlers and that’s what Zampa does. He has dismissed him 7 times in the last 3 years and bowls whenever he’s in the middle. Zampa will give 25 points atleast and has taken atleast one wicket in this entire tour as of now. A safe choice for your Aus vs Ind dream11 teams.

KL Rahul, Matthew Wade and Steven Smith are all good and safe Aus vs Ind dream11 team C/VC choices for Small Leagues. They’ve been consistent with the bat and can do well again.

Virat Kohli, D’Arcy Short, T Natarajan and Moises Henriques have been good on these wickets and can be good prospects for Aus vs Ind dream11 C/VC in Grand Leagues. Virat, is very good while chasing.

Due to the possibility of the batting order for both teams as the series has been sealed, it’s unpredictable where would Samson, Iyer and Virat bat, or whether they stick with the same order. Rotate them in GL teams. 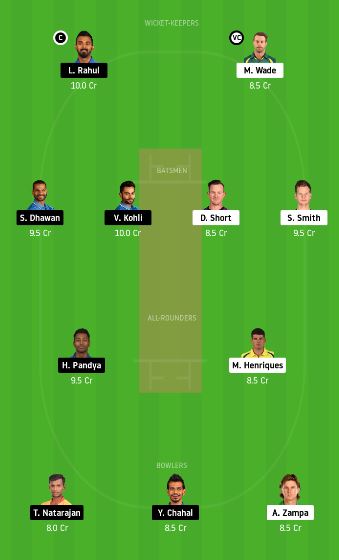