There’s a lot to take into consideration when you’re looking for the best AUK vs OTG dream11 team. Today, We are going to discuss AUK vs OTG 10th Match news, AUK vs OTG playing 11, AUK vs OTG fantasy cricket prediction, and dream11 Expert data. This League is called New Zealand ODD in dream11 leagues.

Renwick had one good game in between and has been good with the bat. Since it’s an ODI game, keeping an opener isn’t too necessary but he’s a good pick for GL and can be tried in risky SL too.

Horne has been a part of the dream team in all three games and looks in consistent touch nonetheless and is a safe choice for AUK vs OTG small league teams. Keep any one of these two, it hardly makes a difference.

One of the most experienced players and has been a terrific opener for New Zealand as well. A must pick in your AUK vs OTG dream11 team.

O’Donnell got 65+ points in the last two games and been in the dream team both times. A no.3 batsman and surely a crucial pick for your teams.

The skipper of Auckland and will bat anywhere in the order depending on the situation but not below No.5. So he’s a good pick and can give good runs with the bat. Can try in AUK vs OTG dream11 Grand league.

A class player and has been a consistent performer over the years in this format of the game. He’s great talent and one of the safest picks for your teams in today match.

A good player in general and has given quickfire cameos in Super Smash last year, but hasn’t got going as such in the ODD format this season. Can try in GL but a hit or miss player.

A lesser-known player in this Auckland side and has looked in good touch but has been unable to convert them to good scores. Can avoid in today SL.

In the previous game where the team was 18/5, he played a great knock of 41 and was the highest scorer of the team in a total team score of 113. He proved his worth with the bat but still way down the order and can be avoided in SL but can be tried in GL after his previous knock.

The skipper of this side and an opening batsman but has been in terrible form with the bat and is yet to even touch 5 runs. Being a captain of a side, he could fire any time soon but currently can be avoided.

Harrison bowled in the first two games but not in the previous one. Not sure whether it’s an injury concern or whether the opposition’s collapse just didn’t need his services with the ball. If he plays and is fully fit, he’s a safe choice and will give good points with the ball.

He’s a great all rounder and has been great for New Zealand A as well as in the domestic arena over the years. Hasn’t been selected by many users and can be a good GL punt pick. Can be tried in SL today.

Just back from the Windies tour and looked in good touch out there as well as collected 50+ points in the only game he played in this season for Aukland. A must pick nonethless.

A tremendous quality player and is a consistent performer and will give points with either bat or ball in every game. A great pick for your AUK vs OTG dream11 fantasy teams. Has looked off colors as of now but can do wonders. Safe choice.

M Rae was tremendous in the last game, i.e., the only game he has played this season. He is a great pick for GL and actually a good pick for SL too even though only 36% of people have selected him.

Lister has been a good bowler in the domestic circuit but hasn’t performed up to his potential yet in this season. we can take him in AUK vs OTG dream11 GL. Risky pick.

Delport has just played two games and was in the dream team in one of them. Again a GL pick can be avoided in SL.

Somerville is consistent with the ball and is a wicket-taking bowler for the team and has been great in this season too. He has been in the dream team in all 3 games and is a must pick for your AUK vs OTG team.

Braak is in the tremendous form currently and has notched up 54 and 120 points in the two games that he’s played. Only 42% of people have selected him and he could be your perfect punt pick even for Small leagues.

Bacon giving constant points above 20 in each game but ODD is a longer format and points accumulated are usually more than that. He can be tried in GL as a constant point giving pick but not in SL.

Hamish Rutherford didn’t play the previous game although he has been selected by 45% users as Captain. If he plays, he’s the safest choice for AUK vs OTG dream11 team.

Anaru Kitchen, Ross Ter Braak, Michael Rae and William Somerville are all good GL C/VC options and are consistent in giving good points for your AUK vs OTG teams. 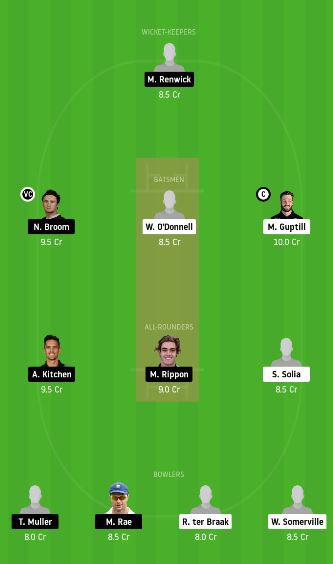