There’s a lot to take into consideration when you’re looking for the best TOC vs EBC dream11 team. Today, We are going to discuss TOC vs EBC 29th Match news, TOC vs EBC playing 11, TOC vs EBC fantasy cricket prediction, and dream11 Expert data. The Bengal T20 is called Roxx Bengal T20 Challenge in dream11 leagues.

Sreevats Goswami has been in the dream team in the last 5 matches and has gotten 50 or more points in all the last 5 games. He’s an automatic choice in your team and is a must pick for TOC vs EBC SL and GL teams.

Gitmoy Basu bats down in the order and isn’t likely to face too many deliveries as it’s a T20 game and coming at No.6 makes it difficult to give him a good chance to score well. Can avoid him in SL.

Abhimanyu Easwaran has just played the last two games in this season but is an opener and can be the perfect GL punt pick since he hasn’t gotten going yet, but is a good batsman and can go big any time soon. Can avoid in TOC vs EBC SL considering his current form. Highest credit player in this game and currently not proving his worth.

Pankaj Shaw didn’t get to bat even after the team lost 6 wickets in the previous game that happened today but came at No.3 in the game before that. His batting order isn’t fixed and can be a very risky pick. Can avoid him today match.

Shekhar Mandal is the highest selected batsman by users and has been a consistent point giver in every game this season. Must pick in SL but can avoid in one or two GL teams. Has given 20 or more points in each of the last 5 games and been in the Dream Team thrice.

He’s the captain of the team and has been playing consistently and is one of the most important picks for your fantasy team. Only selected by 22% of people and can be a great punt pick for TOC vs EBC today match.

Purab Joshi batted well in today’s game and is a one-down batsman for the team as well giving him the maximum chance to play after the openers. Hasn’t done too well but a good GL pick. Can avoid in SL though.

Kazi Junaid Safi is one of the safest picks for your team and a must pick as well. Been in the dream team in the 4 of the last 5 games and has given consistent scores with the bat overall. Just one score below 30 in the last 5 games and is in great form. Must pick player.

Ranjot Singh Khaira (EBC) (one down)

No.3 players are crucial for your team as they get to play a very important role to stabilize the innings after a good opening start or before handing it over to the middle order. A good pick nonetheless but can avoid in SL as he’s only been selected by 33%.

The 7th down batsman is basically a player playing as just a fielder. Hasn’t done anything with the bat as a No.9 player in T20s can’t do much. Can easily avoid in your TOC vs EBC teams.

Md Kaif-I is a good hitter of the ball and has finished the innings with quick cameos but mainly an opening bowler and has picked up wickets constantly in every game. Highest selected all-rounder on Dream11 and is a must pick for your TOC vs EBC dream11 team.

Arnab Nandy is the captain of this team and is performing constantly well with both bat and ball. Has done well and is a must-pick in all your teams in today match, whether SL or GL.

Boddupali Amit hasn’t done anything with bat or ball and even though he started the season with 3 consecutive matches where he was a dream team pick, he hasn’t scored double-digit points in the last three games. Can be a TOC vs EBC GL option and can be avoided in SL.

Artira Chatterjee has given 30+ points in each of his last 5 games and been in the dream team in each game. A very crucial pick for your team and a must pick for SL.

Ananta Saha is the highest selected bowler by fantasy users and has been taking wickets constantly in every game and will give 25+ points nonetheless.

Kanishk Seth is one of the most consistent players for this team and has been giving runs with the bat towards the end of the innings as well when needed. Bowling well and giving 25+ points in every game. A must pick for TOC vs EBC SL and can take risk of dropping him in a couple of dream11 GL teams.

Aziz Ansari has been giving regular points and been bowling well but can avoid in SL teams. Do try him in GL considering the fact that he could give 25+ points.

Mukesh Kumar is the opening bowler for the team and can use the new ball to his advantage on a pitch friendly to bowlers. Today avoid him in SL but do try in GL.

Akash Pandey is a proper dream11 GL punt pick for TOC vs EBC today match. Has picked up at least 30 points in each of his last 5 games and has been in the Dream Team in 3 of the last 4 games. Has been selected by just 12% of people which is not indicative of his performance.

S Goswami and M Kaif-I have been chosen by the majority of people and they are the safest choices.
One of the highest selected VC choices is A Nandy and would also be a safe choice for TOC vs EBC today match.

Sujit Kumar Yadav, K Junaid Safi, and Avijit Singh are some good options to try in GL as they’ve been constant performers and have been doing well with bat or ball and can give good fantasy points. 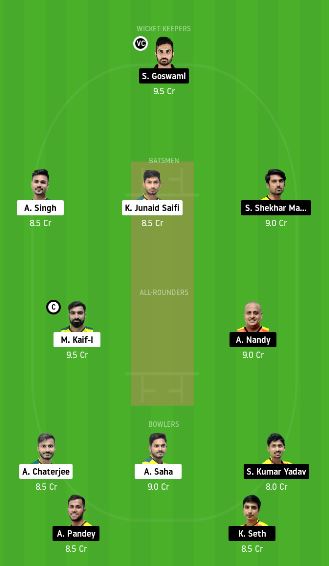