There’s a lot to take into consideration when you’re looking for the best CAL vs TMC dream11 team. Today, We are going to discuss CAL vs TMC 30th Match news, CAL vs TMC playing 11, CAL vs TMC fantasy cricket prediction, and dream11 Expert data. The Bengal T20 is called Roxx Bengal T20 Challenge in dream11 leagues.

Calcutta Customs Club vs Tapan Memorial Club, The 30th match will be played in Eden Gardens on 7 December 2020 at 7:00 PM.

Suvankar Bal is the highest points accumulated by a keeper amongst these two teams this season. Consistent performer but since he comes down the order, he won’t get many deliveries to face. Still, a safe option to keep in today team.

Gandhi has been a consistent performer and he also comes at the same batting position as S Bal. He’s a safe option for CAL vs TMC dream11 team and also getting points consistently.

We can avoid him since two better options are available in this section. He batted one down in the previous game for the first time this season and batted well too. He can be tried in GL though.

Scoring a century in a T20 game shows his worth with the bat and is surely a good pick in your CAL vs TMC team. Has looked in good touch and can be a good pick in SL.

Doesn’t get much deliveries to face and is a waste of a pick for CAL vs TMC SL since he would come at No.7 to bat. He got more than 60 points twice in the last 5 games but is still a risky pick due to his batting position.

An opener gets to play the most deliveries and he has been in good touch throughout the season. Can be a good pick and can drop in risky SL as he hasn’t even crossed 20 in any game.

He looked good but hasn’t been able to get on with consistency. Can be a GL pick for today match.

Godara hasn’t done anything worth noting and can be avoided in your CAL vs TMC dream11 teams.

Ghosh has been giving points consistently and has given 25+ points thrice in the last 4 games. Can be a good pick since he’s an opener too.

Pathak is 4th down batsman doesn’t give him too many deliveries to play unless the top order collapses. Hasn’t done too much and can be avoided.

An opener just selected by 5% of users. A good GL punt picks for today match.

S Das got 626 fantasy points in one season is clearly suggestive of how consistent this player has been in this tournament. A safe choice and a must pick in your CAL vs TMC dream11 team whether SL or GL.

He’s the same RCB player and has the IPL training and experience behind him which makes him a clear choice to be selected in the team. A must pick for SL and GL teams. He’s also the team’s skipper.

Vikash Singh (TMC) (opener and 1 over)

Has consistently gotten points and has been in the dream team thrice in the last 5 games. Surprisingly has just been selected by 13% of users. The perfect GL punt pick for today match.

Ramesh Prasad has been impressive and a wicket taking bowler for the team and has been giving constant points in fantasy. A must pick in your CAL vs TMC dream11 team.

The same player who was the youngest to go sold in IPL and was bought by RCB in 2019. Has that training to support him and is doing well with the ball out here as well in every game. Been economical and collected wickets too. Yet again a must pick.

A very consistent bowler and has taken at least one wicket in 7 of the 8 games that he’s played this season. A must pick in CAL vs TMC SL teams. Would surely give at least 25 points.

Has given more than 30 points in 7 out of 8 games that he’s played and is one of the most consistent players for your teams. Cannot avoid in SL teams.

Not been consistent as such but if he bowls more than 2 overs, he has gotten wickets. Risky pick. Can try in GL.

Opening bowler and ends up collecting at least 1 wicket if bowls his entire spell of 4 overs. Last league fixture. He can be a GL punt pick since he’s not been selected by many users.

It’s surprising to see why has he just been selected by 16% of people. He has been in the dream team thrice in the last 4 games and has gotten more than 30 points all those three times. He can be the best GL punt pick.

Opening bowler. Went for plenty in the previous game but did well in the game prior to that. He’s just played two games and would be likely to feature in the final league fixture as well. Can be a good pick for GL nonetheless.

S Das Sr, Shahbaz Ahmed and Ramesh Prasad are the most chosen players as C/VC by users and hence are the safest choices for CAL vs TMC today match.

Kaif Ahmed and Prayas Ray Barman could be good GL picks for C/VC due to their current form and consistency. 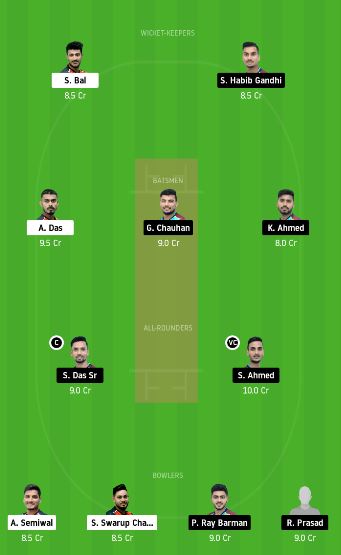