There’s a lot to take into consideration when you’re looking for the best CD vs WEL dream11 team. Today, We are going to discuss CD vs WEL 12th Match news, CD vs WEL playing 11, CD vs WEL fantasy cricket prediction, and dream11 Expert data. This League is called New Zealand ODD in dream11 leagues.

Central Districts vs Wellington, The 12th match will be played in Fitzherbert Park, Palmerston North on 8 December 2020 at 3:30 AM.

Jones has been drafted in the dream team in all 3 games and has looked in a good touch but is still waiting for a long innings where he converts his starts into a good score.

Wiggins has been a better batsman than Jones and has also been doing well in terms of giving starts. He is a safe choice for CD vs WEL dream11 SL teams.

Smith is high on confidence after his previous knock but still lacks consistency and can be a risky choice to drop in SL but can take the risk but then keep him in GL to cover up if he scores big one again. Hit or miss for CD vs WEL today match.

Leopard is batting way below his comfortable position and can be avoided in SL teams, as he is still looking to get past the 20 run mark.

Bruce is actually a good batter and has been playing well over the years. He’s also the skipper of this side but has looked off colors in this season and is yet to find his form back.

Colson bats way down the order and hasn’t shown too much prowess with the bat other than one game where he played well considering the situation. If the top order collapses, he could rise up to the occasion again but a risky choice for today’s match.

Fletcher looked in good touch with the bat against the same opposition in the previous outing and can do well again. Can try him in GL or risky SL teams too.

Worker has gotten more than 100 fantasy points in both his previous games and is the safest choice to have in your team and is a must pick for CD vs WEL dream11 team.

Clarkson has been a consistent point getter for the side and has gotten 55+ in each of the three games having been drafted in the dream team in all three as well. He’s another safe choice for your teams.

Bracewell is the skipper of the side and is leading from the front by performing well with both bat and ball. He has gotten 75+ points in all three games and is by far the most crucial pick and the safest pick for your CD vs WEL teams.

Younghusband is a good pick overall and has been doing well in the domestic circuit over the years. Played well against the very same opposition in the previous game and can be a good GL pick.

Gibson has been a good point giver but seeing the all round options in the two sides, he might not be preferred by many users and that can be a trump card which could be used in GL as a punt pick, but only as a normal player.

Field has been bowling well but hasn’t been consistent in terms of picking up wickets which are more important for fantasy teams. Can be a good GL pick but would be risky to drop in CD vs WEL dream11 SL considering the selection percentage.

McPeake is one of the finest bowlers in this unit and has been a consistent wicket taker over the years. He is the safest choice for SL teams.

Lennox is an underrated bowler who can do well and pick up wickets at crucial intervals. He’s a complex bowler and hard to hit in general. He could be a good GL pick for CD vs WEL dream11 team.

Dudding, amongst the options in the bowling category, seems to be a good GL choice and maybe could be a good punt pick for the same.

Sears has just played one game and ended up on the dream team list. He played against this very opposition. He is an excellent choice for SL leagues since he hasn’t been selected by many users. Ben could be the perfect trump card for today’s match.

Rance is a capped player and was one of the leading wicket-takers last year but hasn’t been able to do much with the ball in terms of picking up wickets since a very long time now and is looking for his wicket-taking ability again. Try him in GL, can avoid in CD vs WEL dream11 SL. Will give 25 points atleast though.

George Worker and Michael Bracewell are nonetheless the perfect options for CD vs WEL dream11 C/VC and can be rotated opposite in GL as well. They are consistent performers with both bat and ball and can expect them to fetch highest fantasy points in this game too.

Other than Michael Bracewell and George Worker, Peter Younghusband, Josh Clarkson and Ben Sears could be good prospects for C/VC choices for grand leagues. They are also consistent point scorers and can do well with either bat or ball in CD vs WEL today match. 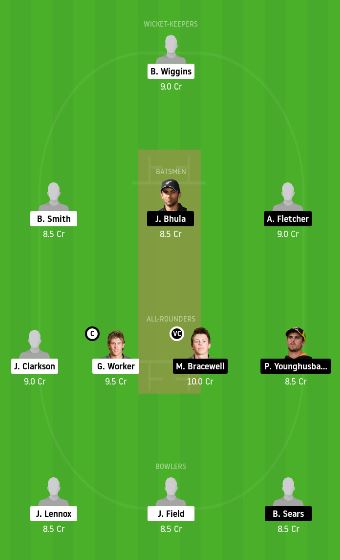