There’s a lot to take into consideration when you’re looking for the best WS vs SV dream11 team. Today, We are going to discuss WS vs SV 13th Match news, WS vs SV fantasy Cricket prediction, and dream11 Expert data. This League is called Rachael Heyhoe Flint Trophy / England Womens ODD 2021 in the dream11 app.

Western Storm vs Southern Vipers, The 13th match will be played in The Cooper Associates County Ground, Taunton on 12 June 2021 at 5:30 PM.

WS vs SV
Western Storm is a weak side lost last game by 6 wickets against SES. They have also won 1 while loosing 2.

Southern Vipers is a strong side but lost last game by 120 runs against CES. They have played 3 games won 2 while loosing 1.

Both wicket keeper are below average. Only keeping points are expected from them as both batting 6-7 down. Try N Wrath in max teams.

S Luff will also bat 1 down for WS. She is good player and is capable of scoring big. She has scored 117 runs in 1st 3 games.

Rotate L Parfitt and D Gibson in your teams. Both have been in good form but lack consistency. L Parfitt scored 91 2nd match but could only manage 9 run last game.

D Wyatt and G Adams will open the innings for SV. D Wyatt is good player and is capable of scoring big. She has scored 178 runs in last 3 game.

G Adams will provide points from both departments. She has scored 37 runs and picked up 4 wickets in 3 games.

G Hennesssy will bat at 2 down and is very good player will provide points through both department. She scored 35 run and picked up 4 wicket in 1st 3 game.

H Knight is WS best player she is best allrounder of side must have player from this side whole side depends on her performance. She has scored 223 runs and picked up 1 wicket in 1st 3 game.

F Morris will bat 4 down is a very good allrounder from the side capable to score big also has ability of picking wickets. she scored 52 runs in 1st 3 game and also picking 2 wickets.

C Dean is the important bowler for SV. She has picked up 7 wicket in last 3 game also scoring 68 batting 3 down.

G Elwiss will bat at 2 down and is very good player will provide points through both department. She has scored 55 run and picked up 2 wicket in last 3 game but she is top allrounder.

A Shrubsole and L Filer will lead the bowling attack for there respective sides.

A Shrubsole will also provide points through batting as A Shrubsole scored half century 1st game. She has picked 4 wickets in 3 game also scoring 101 runs with bat.

T Norris and C Taylor will lead the bowling attack for SV. L Smith and L Bell will assist them and all has been in good form. C Taylor has picked 8 wickets in 3 games. 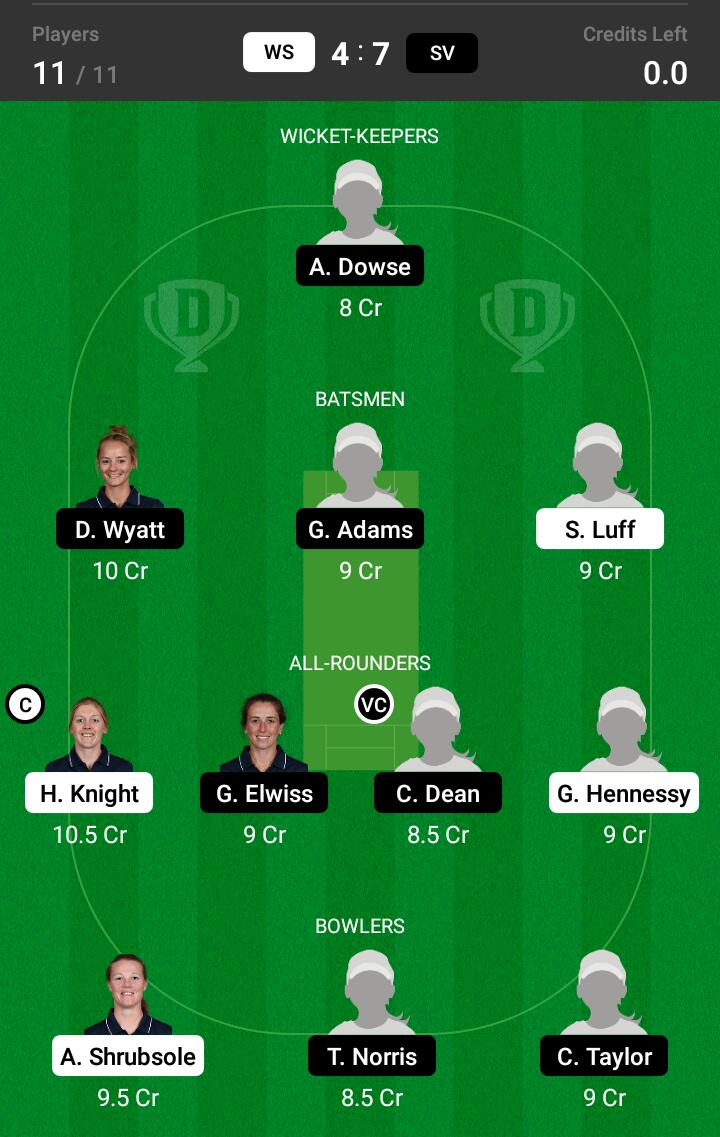