There’s a lot to take into consideration when you’re looking for the best NOD vs SES dream11 team. Today, We are going to discuss NOD vs SES 16th Match news, NOD vs SES fantasy Cricket prediction, and dream11 Expert data. This League is called Rachael Heyhoe Flint Trophy / England Womens ODD 2021 in the dream11 app.

Northern Diamonds is the most good side won last game by 9 wickets against strong SUN. They have played 3 game winning 2 while loosing 1.

South East Stars is the most strong side won last game against WS by 6 wickets. They are good side. They have played 3 game winning all 3.

L Winfield will open the innings for NOD. She is very strong batsman of side who scored 110 1st game but got out after scoring just 9 run in next 2 game. She is consistent international performer.

R Southboy is below average. Only keeping points are expected from her as batting 6-7 down.

S Kallis is wicket keeper but not keeping here and have been consistent in domestic circuit and bat 2 down. She scored 197 runs in 6 games last season. She has scored 43 runs in 1st 3 games.

S Dunkley will bat 1 down for SES. She is very strong batsman of side who scored 104 1st game but got out at duck 2nd game and again score 94 3rd game. She is also consistent international performer.

Rotate A Cranckstone and A Macdonald in gl teams as there are not much good option in this category.

N Sciver will bat at one down and is very good player will provide points through both department. She has scored 26 run and picked up 2 wicket in last3 game but she is top allrounder in world.

J Gunn is the opening bowler for NOD and picked 4 wicket in last 3 game also scoring 57 batting 4 down.

H Armitage is must have player for gl provide points through both department did not bowl last game but can bowl any game till now she has scored 176 runs and picked up 6 wickets in 7 games last season. She has scored 39 runs in 1st 3 games.

A Davidson is there best player she is best allrounder of side must have player from this side whole side depends on her performance. She has scored 145 runs in last 3 game opening inning.

A Capsey will bat 2 down and bowl 3-4 overs. She has 141 runs in 6 games also picking 2 wicket before this series. So try him in gl teams.

B Smith is must have player provide points through both department. She has scored 121 runs in last 3 game and also pick 6 wickets.

K Brunt and B Langston will lead the bowling attack for there respective sides. L Smith and K Levrick will assist them and all has been in good form. K Brunt will also provide points through batting as She is batting 3 down. She has picked 9 wickets in 3 game and scored 44 runs. 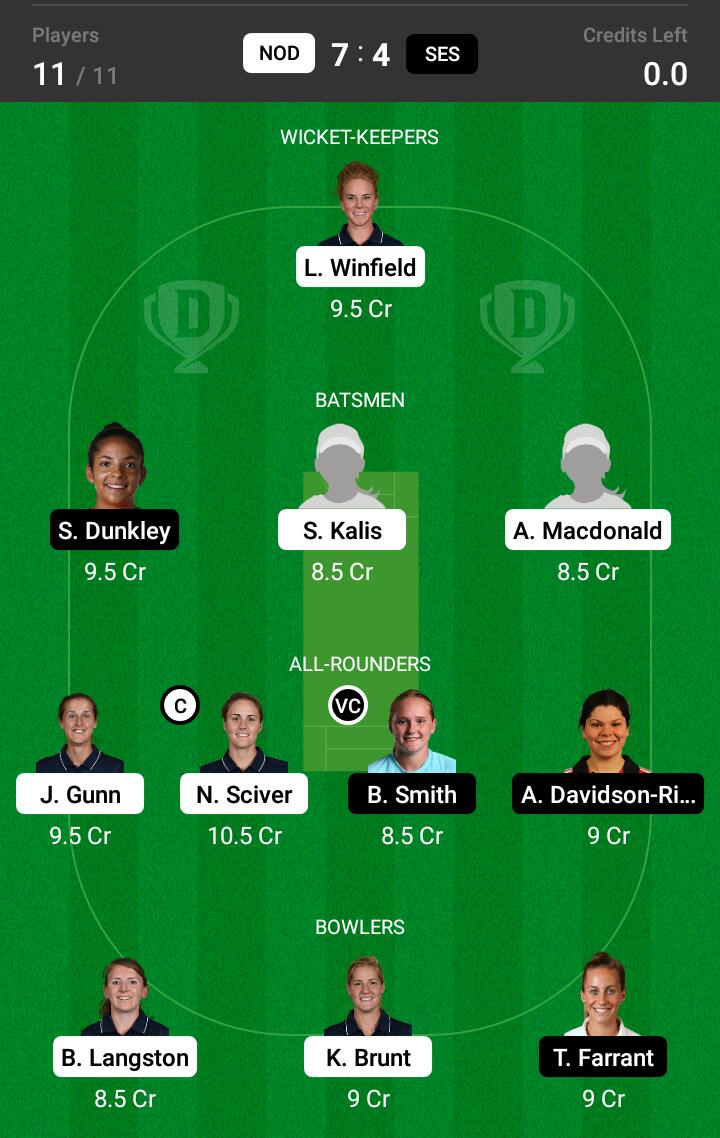