There’s a lot to take into consideration when you’re looking for the best GGC vs GKH dream11 team. Today, We are going to discuss GGC vs GKH 22nd Match news, GGC vs GKH playing 11, GGC vs GKH fantasy cricket prediction, and dream11 Expert data. The Bangabandhu T20 Cup is called Bangladesh T20 in dream11 leagues.

Gazi Group Chottogram vs Gemkhon Khulna, The 22nd match will be played in Shere Bangla National Stadium on 14 December 2020 at 5:00 PM.

Das has been quite consistent and has evolved as an amazing opener for Bangalesh. He has been in the dream team in 6 games out of the 7 he’s played, and is a must pick for your GKH vs GGC dream11 team and a very safe pick.

Mithun is the captain of the team and has been giving consistent points above 20 in every game and can be a safe pick. Do try in GL. He hasn’t looked good in the previous two games so can avoid in SL.

Even though Hom is under the category of Batsmen, he has been giving points with the ball by picking wickets in every game. He’s a GKH vs GGC dream11 very safe pick looking at his consistent form.

Hossain started the tournament well but has gone down as the games have progressed. He can be left out in SL. He’s giving points on the field rather than the bat.

Islam is one of the best GL punt picks. He is a hit or miss player and did well in the previous game but lacks consistency. Can avoid in Risky SL. Do try in GL at that time. He opened in the last game and can open again after some good knocks.

Kayes has been in the dream in all the last 4 games that he’s played in and looks to be a very safe choice to be kept in your GKH vs GGC dream11 team.

Rahman is one of those players who can easily be left out from the fantasy SL teams. He has been giving some points and can be tried in GL.

Sarkar’s by far the safest and best option for your GKH vs GGC teams. He has been doing well but can risk by dropping him in GL. Must pick in SL.

Shakib has been one of the highest rated all rounder in T20s over the years but hasn’t been consistent in this series. He does well and is still a must pick for SL teams.

Hossain has been in great form and been in the dream team 4 times out of the last 6 games. He is a very safe pick and a must pick in your teams.

Mahmudullah has consistently been giving good points and been in the dream team in each of the last four games. He is a safe choice and should be taken in SL teams.

Rahman has been the pick of the bowlers and has consistently been a wicket taker for this side in every game. He has been in the dream team in all 5 games that they’ve played and looks in great touch.

Another good option for your teams is Shahidul. He has been bowling well in every game and has the wickets to support his numbers as well.

Nahidul has been on and off in terms of picking up wickets and hasn’t been too consistent in doing that. He could be a good GL punt pick.

Mahmud has also been a bit inconsistent but has been bowling well and you can expect atleast 25 points from him in this game as well. A good GL pick for GKH vs GGC today match.

Liton Das has been selected as Captain by 23% users and VC by 27%, and is the safest choice for the same.

Shakib Al Hasan and Soumya Sarkar are also safe options for Small Leagues in GKH vs GGC today match. Sarkar has been selected as a C by 44%. Users’ combination is Sarkar C and Das VC.

Mosaddek Hossain, Mahmudullah, Shuvagata Hom and Mustafizur Rahman are consistent and really good choices for GKH vs GGC dream11 C/VC in Grand Leagues teams. They could even be tried in Risky SL teams. 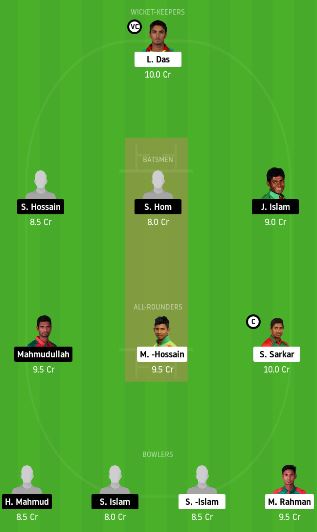