There’s a lot to take into consideration when you’re looking for the best BDH vs FBA dream11 team. Today, We are going to discuss BDH vs FBA 21st Match news, BDH vs FBA playing 11, BDH vs FBA fantasy cricket prediction, and dream11 Expert data. The Bangabandhu T20 Cup is called Bangladesh T20 in dream11 leagues.

Beximco Dhaka vs Fortune Barishal, The 21st match will be played in Shere Bangla National Stadium on 14 December 2020 at 12:00 PM.

Safest choice and a must pick in your FBA vs BDH dream11 teams.

Worth trying in GL teams. Has done well and can notch up runs well.

He has been in the dream team in every game other than the first one. He is a very safe pick and is a must pick for your FBA vs BDH teams.

Scored a ton in one of the games but wasn’t able to cross a 20 as well otherwise. Can be a GL pick and can also be picked in SL due to the selection percentage.

He has been batting consistently well in every game. Do try him in SL teams by dropping Parvez Hossain.

Looks as an explosive opener and has looked good with the bat especially in the powerplay overs. Do try in GL and drop in risky GL

Played the last two games brilliantly and ended up getting 61 and 60 points respectively. He is a perfect GL punt pick in FBA vs BDH today match.

He has proven his worth with the ball and has been consistently doing well. He’s a safe choice in the all round options.

Has gotten 120+ points twice in the last 4 games and is quite a safe pick for your FBA vs BDH dream11 teams.

He has been a safe pick and a consistent wicket taking bowler.

He has picked up atleast 2 wickets in 4 of the last 5 games and is a safe pick.

He has been a safe pick as well and has given points consistently. Can try dropping in SL but do try in GL.

He has given atleast 40 points in every game that he’s played and has been bowling well.

He can be a GL pick and can be avoided in FBA vs BDH dream11 SL teams. He hasn’t done as much as one would expect from him and has been wicketless in maximum occasions.

Tamim Iqbal, Mushfiqur Rahim and Muktar Ali are safe options for FBA vs BDH dream11 C/VC choices in this game. Can even try Rubel Hossain in Risky SL teams. 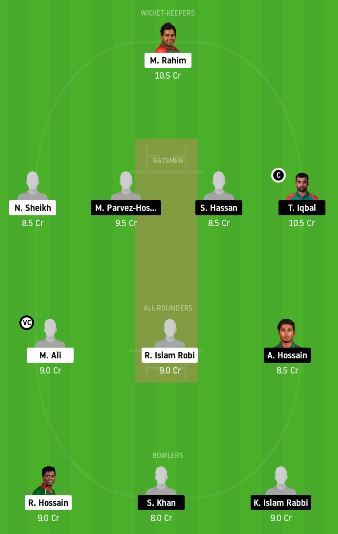