There’s a lot to take into consideration when you’re looking for the best THCC vs PSV dream11 team. Today, We are going to discuss THCC vs PSV 37th Match news, THCC vs PSV fantasy Cricket prediction, and dream11 Expert data. This League is called Fancode ECS T10 Kiel 2021 in the dream11 app.

Hamburg is a weak side. They won last game against VFB by 33 runs. They have played 5 game lost 4 while winning only 2.

Hann Muden is a very strong side but has been inconsistant this season. They have played 4 games winning 2 also loosing 2.

C Jefferys is very cruicial player from THCC. He mostly bats 1 down but in last 2-3 games batted lower order has scored 30 runs in 6 game.

M Jakati is opening since last 2 games but very inconsistant player. He has scored 68 runs in 4 games.

A Sangari open inning for PSV has been getting start every game. He has scored 37 run in 1st 4 games.

A Ahmad and M Yousufzai i are must have from this section.

M Yousfzai is batting allrounder who also bats well. He has scored 19 runs in 4 games and picked up 1 wicket.

Rotate B Ali and I Hafiz in gl teams. I Hafiz open inning and very consistant batsman but could not convert his starts.

G Mustafa in starting game use to open now batting 3 down and bowling some spin. He has scored 47 runs in 4 games and picked up 3 wickets.

A Safi is bowling allrounder who also bat very well. He has taken 4 wickets in 4 games.

A Pickering must have from this department, will bowl 2 overs can pick 1-2 wickets. He has experience of county cricket. He has picked 8 wicket in 6 games and scored 100 runs also open inning.

A Jha is must have from this department, will bowl 2 overs can pick 1-2 wickets also open. He has picked 3 wicket in 4 games and has scored 93 runs. He got injured so missed last 2 games.

A Zadran is very good allrounder who bats 3 down and bowl 2 overs. He has picked 6 wicket in 4 games and has scored 22 runs.

J Javed and W Muhd are other bowler who should be tryed as they are bowling 1-2 overs can pick 2 wicket anyday.

A Jana and B Safi are wicket taking bowler so don’t ignore them.

A Jana has scored 104 runs in 5 games also picking 7 wickets before this series. He has scored 44 run in 1st 6 games and picked up 4 wickets.

Try R Phadke and A Sivakumar in gl teams only as they does not bowl every game. B Safi is not doing anything since last few games.

Captain Choice: A Zadran, A Pickering

Vice-Captain Choice: A Jha, A Ahmad, A Safi 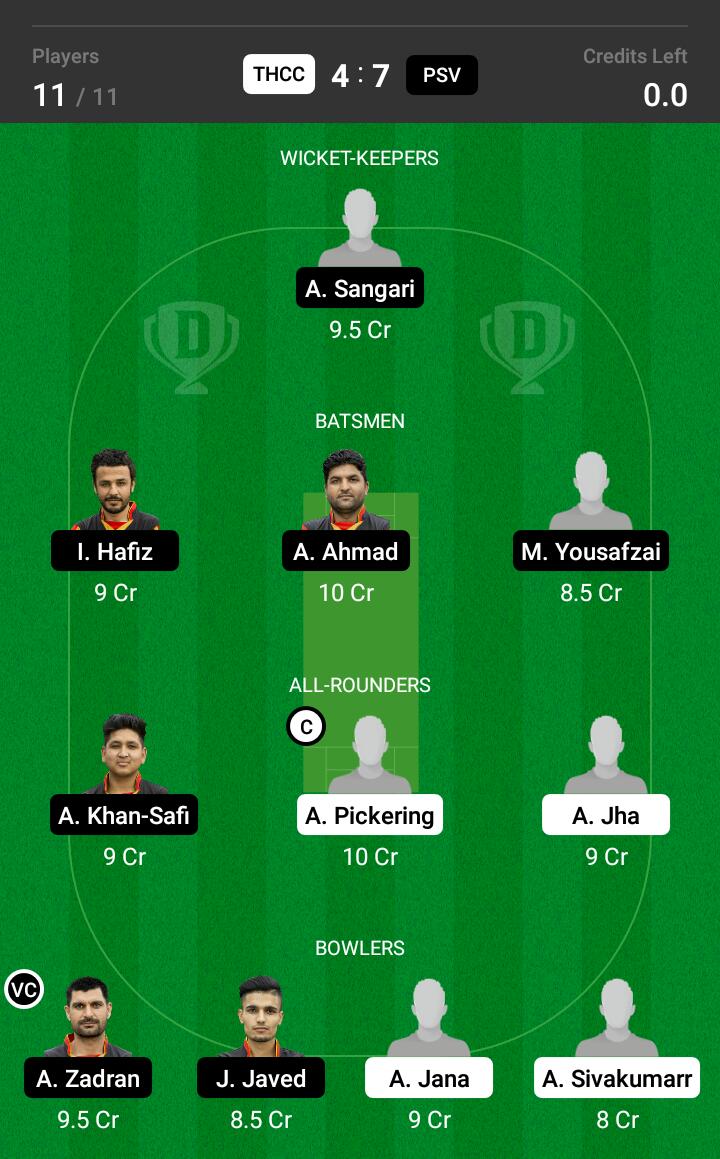