Sydney Sixers vs Adelaide Strikers, The 11th match will be played in Bellerive Oval, Hobart on 20 December 2020 at 1:45 PM.

He is a consistent batsman and loves to play for the Strikers. The skipper as well as the keeper of the side and gives good points in every game.

He is a BBL star and is a consistent run getter for the Sixers as an opener and notched up a 95 in the previous game too. Safe pick and a good pick for the SIX vs STR dream11 grand league teams too.

He is a good batter and can be a safe pick for your SIX vs STR dream11 team. He gives good points in every game. Can try dropping in GL if they bat second.

Try dropping him in SL and try him as a hit or miss player in GL teams, if batting first especially.

He was a good batsman in the last season but can only bat well if he gets enough deliveries to face which could be a bit tough, but do try him as a normal player in GL teams, where you drop any 2 of the top 4.

He is the skipper of this side and will look to get good runs with the bat. Can be a good pick for GL. Can try in SL in place of Vince if batting second.

Safe pick in your teams. Has been a consistent scorer for the Strikers over the last 2 years and is a good pick for SIX vs STR today match.

Bats quite down the order and with the inclusion of Carey in the side, he can be avoided in SL due to his batting order. Can try in a GL team as a normal player though.

Hit or miss player. Try in GL as C/VC and in SL as a normal player. Can even risk by avoiding him for Hughes in SL.

Consistent point getter for his team either with bat or ball. Must pick and safe pick for SIX vs STR dream11 team.

He had a great CPL season as well as a great IPL season as a replacement to M Marsh. He looks to be in prime form with both bat and ball in this format of the game and is surely a safe pick.

Can be tried dropping in GL, but is bowling a couple of overs and is a consistent batsman too. Must pick in SL.

Safe 25 points from him. He hasn’t been picking up too many wickets but everyone knows his worth in the T20 format. Try in GL, can avoid in risky SL.

Batting well and picking up atleast one wicket in every game. Giving more than 30 points in every game and looks to be a safe pick for SIX vs STR match.

Must pick especially after the previous game of a 5 wicket haul. Bowls at the death and makes it easier for him to get wickets. If bowling second, can try avoiding in a couple of GL teams.

Can be avoided from your teams. Was even subbed for the X Factor player in the previous game and isn’t very certain to feature.

A good pick for your teams. A good speedster and bowls at the death too. Worth trying in GL.

Safe pick and must pick. Has picked up 7 wickets in the last 2 games and is high on confidence.

He will get 25 points and can be a GL try if he does play.

Hasn’t played in this season but is a good GL try as he does end up with atleast a wicket to his name.

If he plays, he can be tried in a GL team. He could be left out too as the wickets haven’t been helping spin much and the spinners are being subbed for X Factors as the seamers are enjoying on these wickets more.

Joshua Phillippe, Alex Carey, James Vince, Ben Dwarshius and Jake Weatherald are safe choices for Small League teams and have been chosen by most users. Phillippe-Vince/Dwarshius is the SIX vs STR dream11 C/VC combination which maximum people have opted for.

Other than the ones mentioned above, Jason Holder, Phillip Salt(while batting first), Matt Renshaw and Daniel Hughes are good prospective choices to try in GL. 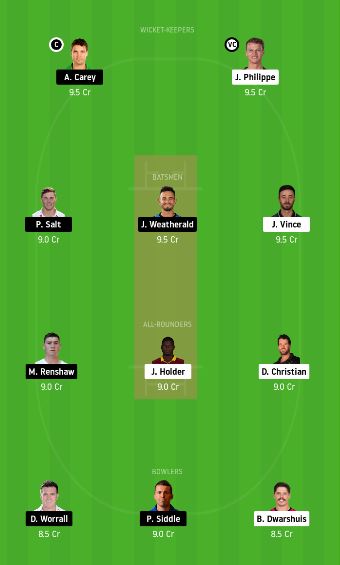 If you are like our SIX vs STR dream11 prediction. Please share this article with your friends, who are playing dream11 fantasy leagues. Don’t forget to follow us onTwitter, Telegram, and Youtube for the best dream11 tips and tricks.