Mohammad Siyadat Ramil and Ainool Hafiz will bat at number 3 and 4. Mohammad Ramil is a very attacking player, he scores 30+ runs. While A Hafiz can score with both bat and ball.

Anwar Arudin and Alam Khan bin Malik will open the innings for Central Smashers. Anwar Arudin is a technically strong batsman. He can score 30+ runs at the top. While Alam is a moderate player.

Ammar Hazalan and Ahmad Faiz will bat at number 3 and 4. Ahmad Faiz is a good experienced player, he can score 30+ runs. While A Hazalan strike rate is good in this format.

Lokman Nur Hakim Sahar, Muhammad Wafiq, Ajab Khan, and Wan Julia will lead the bowling attack. Wan Julia is a woman cricketer, she may not get a better chance to perform. She can be avoided. While Wafiq and Ajeb Khan are promising wicket-takers.

Syed Aziz is the best choice for the captain as he plays aggressively at the top. And he has the best records in a short format.

You can try A Faiz and N Rahman in SH vs CS VC Option. They are good with both bat and ball.

A Hafiz is a very good batsman, he can score maximum at lower if he gets a chance to bat earlier. A lot of People will take him as a player only in SH vs CS. 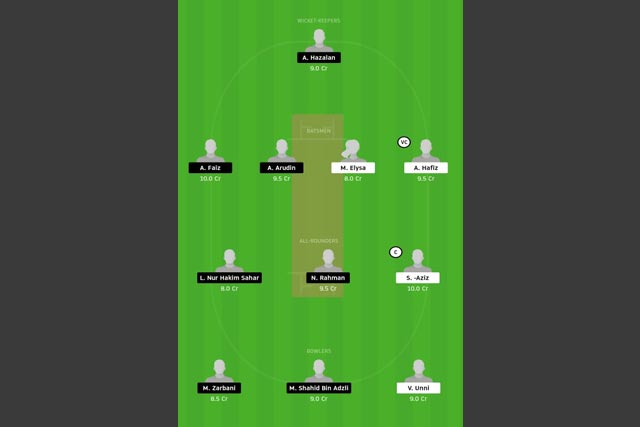