RR won there 1st game by 16 run and 2nd game by 4 wickets but lost 3rd game, 4th game, 5th game, 6th game but won 3rd last game due to brilliance of Tewatia but again lost 2nd last game but won last game will want to be in winning ways otherwise it will be the end for them, while SRH looked the weakest side of tournament in 1st 2 games losing both, but then won 2 again loosing next winning next but again loosing next 2 game has been inconsistent.

R Uthappa and B Stokes will open the innings. Steven Smith will bat at one down. and Sanju Samson, B Stokes and R Parag will bat in the middle order. Rahul Tewatia will do late hitting.

Jofra Archer and A Rajpoot will bowl in the powerplay. B Stokes, K Tyagi will assist them. Shreyas Gopal will lead the spin attack.

David Warner and Jonny Bairstow will open the innings. Manish Pandey will bat at one down. Kane Williamson with Priyam Garg will bat in the middle order. Abhishek Sharma will bat at the bottom with V Shankar.

Sandeep Sharma and Khaleel Ahmad will bowl in powerplays. Rashid Khan will do the spin attack. Vijay Shankar and Abhishek Sharma will bowl in middle overs. T Natrajan is their 3rd pacer and main death bowler.

Jos Butler strengthens them at the top must-have player very consistant also keep, came back to form with his superb batting 2nd last game, will look to perform this game also, was demoted last game.

Ben Stokes returned to the side after a long gap must-have player bowl 4 over and also opening the inning.

Y Jaiswal would be disappointed with his starts to IPL career, but the young gun very promising future for India.

Steven Smith has looked in rock-solid touch in 1st 2 games, treated as consistant but failed in last 4 games, but came back to form last game must have a player

Sanju Samson will try to score quick runs. He will try to hit maximum sixes. But He can lose his wicket in that case, was superb in 1st 2 games can easily score 70 + in few balls, but got out early in the next 4 games.

Mahipal Lomror player from Rajsthan is a class player showed his worth in his 1st game of the season, has been brilliant for Rajasthan in the Syed Mushtaq tournament, might place this game,

R Uthappa who has been very poor, in middle order got back to form last game-opening inning which is his best position.

Jofra Archer will try to pick maximum wickets in death overs, also acting as a finisher of side hitting 2-3 six in few bowls.

Jaydev Unadkat was in very good form in domestic, which is missing here. We can expect 1+ wickets from him, K Tyagi looked good future prospects in his debut IPL.

R Tewatia has been finding for them this season hitting 6 with ease also assist Shreyas Gopal with his leg
spin.

David Warner is not in a prime form not scoring at a good pace. But He play well in IPL matches, lost his wicket last game very unluckily, We have seen his efforts last season.

Jonny Bairstow and Kane Williamson are very consistent with the bat. So, They can stand for a long time.

Manish Pandey is technically very strong. Most of them will not keep him. If you want to take a risk in SRH vs RR small league means to take him.

A Sharma will make the middle order stronger also bowl 1-2 overs played a beautiful inning last game, A Sammad from Jammu will finish the inning hard hitter can also bowl part-time leg-spin but less chance of play as V Shankar will play who is much more experienced also bowl medium pace.

P Garg showed he is the future of India with his maiden half-century very compact player.

Sandeep Sharma has been wicketless in most of the T20 matches since last season, His credit is also high. So, can be avoided.

Khaleel Ahmed is very good at wickets taking, T Natrajan has been the pick of the bowler for them till now.

Can keep J Bairstow as SRH vs RR team captain OR Vice-Captain. He was brilliant in 1st games, If the game is set means, We can expect a 60+ score from him.

Sanju Samson can be a choice for captain and vice-captain. Because he has been in good form will provide dream11 points from his brilliant fielding with superfast batting.

S Samson, S Smith’s recent records are not good. But they are very good at playing IPL. So, You can pick them also in Captain and Vice-captain choices in 1 risky gl team.

To crack the IPL match 22 crores league, You should take more risk by avoiding high credit players. Use below players in your dream11 team Grand league.

Unadkat is also selected by less than 10%. He can surely pick 2+ wickets, as a bowl in death.

M Lomror is selected by less than 10%. He will bat 3 down, and on his day can score big in few bowls and also bowl 1-2 overs, So you can take a risk in any one of the grand league team.

V Shankar is selected by less than 10%. He will bat 3 down, and on his day can score big in few bowls and also bowl 2-3 overs, So you can take a risk in any one of the grand league team.

A Sharma is selected by only 20% of the dream11 players. His domestic records are strong.

Priyam Garg is selected by less than 20% of the peoples. He will bat 3 down might perform well as in last game. 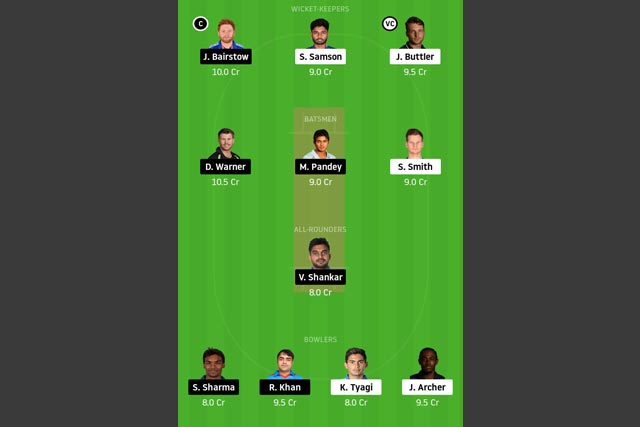