There’s a lot to take into consideration when you’re looking for the best RR vs SRH dream11 team. Today, We are going to discuss RR vs SRH 28th Match news, RR vs SRH fantasy Cricket prediction, and dream11 Expert data. This League is called Indian Premier League 2021 in the dream11 app.

Rajasthan Royals vs Sunrisers Hyderabad, The 28th match will be played in Arun Jaitley Stadium, Delhi on 2 May 2021 at 3:30 PM.

Rajasthan Royals is looking very weak side. They will miss there main player Ben Stokes after he has got ruled out of entire IPL. They are also missing Jofra Archer for 1st few games. RR lost 1st game in a close encounter, won 2nd game against DC then again lost 3rd and 4th game, won 5th game but again lost 6th game.

Sunrisers Hyderabad lost 5 games and won just 1 game and there batting looking very weak. K Williamson will lead them now and will look to change fortune.

Jos Butler returned to opening last game as B Stokes is out of IPL will strengthen them at top must have player very consistant can also keep. He has Failed in all games but very good player.

Sanju Samson will try to score quick runs. He will try to hit maximum sixes. But He can lose his wicket in that case. He will also lead side this year. He scored brilliant hundred 1st game. Sanju was lone warrior for RAJ 1st game. He has failed in next 3 game. In 2nd last game he batted sensibly and took his team home.

David Warner is in very good form got out early starting game but scored good half century in last game. He will try to hit more fours. So, his thunder shots will bring quick runs. He also plays a very crucial role in fielding. He can be dropped this game and replace by J Roy.

Kane Williamson is very consistent with the bat. Williamson can stand for a long time. He is playing 1 down. He scored brilliant half century 2nd last game. Kane Williamson will lead side now.

Manish Pandey is technically very strong. He missed last 2 game. If he plays Most of them will not keep him. If you want to take a risk in SRH vs CSK small league means to take him. He was highest scorer for them in 1st two game also scored 60+ last game but his SR is big problem.

D Miller will bat 3 down. He has been consistant performer in International cricket in past 1 year. He was best for RR 2nd last game.

Manan Vohra has been very poor for RR and last game got replaced by Y Jaiswal this game. Y jaiswal isvery talented youngster looked compact in his 1st game.

R Tewatia will do quick runs and everyone will wait for his batting. He also handy in taking wickets with his leg spin.

S Dube will try to hit all balls. He played well in some domestic matches. Dube will surely add dream11 points from both units. He also played well last game but playing very slow.

J Holder is expected to finish inning for SRH and will bowl 4 over every match. He is coming with great international form. M Nabi played 1st game. J Holder missed last few game but can play this game.

Bhuvneshwar Kumar has been wicketless in most of the T20 matches last season and 1st match also. His credit is also high. So, can be avoided in few teams. But he was superb in IND vs ENG series so dont drop him in small league. B Kumar missed last few game as he was injured. He expected to play this game

T Natrajan is very good at wickets taking. He is known for good variation and these ground are suiting his style of bowling. He has been ruled out of IPL so dont take him.

C Sakariya, J Unadkat will strengthen the bowling unit. C Sakariya was exceptional in all matches bowl with good variation. 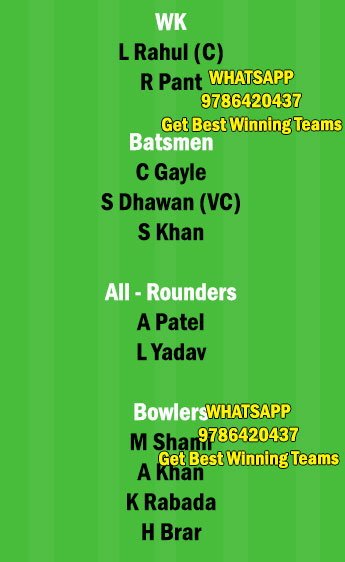