PRS lost 1st game by 9 wickets but is a good side, while PCC is also a very good side but has been inconsistent in last season.

S Sengupta, K Venkatswamy will open the innings of PRS. S Sengupta must-have player experienced player has a good average also bowl best for the captain. While K Venkatswamy is also a good allrounder. P Bhalodiya can also open who bowls full time has 798 run in 43 games and has also picked 45 wickets.

J Iqbal will bat at one down and is a very good player, is a good player to have in the team also a very handy allrounder.

S Sengupta, N Tyagi will be the opening bowler for them, and both have a good domestic record and are very experienced bowler for them. J Iqbal, S Wani will assist them and known for taking wickets, S Wani is their 4th and 5th bowler also chipping with wickets.

H Ahmad and S Gladson will open the innings of PCC. Both are must-have players as both can bowl 2 overs also, H Ahmad is an International Czech player, must have player has good record while S Gladson is a very hard hitter and has a good record also bowl part-time.

S Ramakrishnan, will bat at one down and is a very good player, play very attacking cricket hit six with ease also bowl part-time.

M Glew, S Madrunga are the consistent wickets taker for them, M Glew has 104w in 72 matches games a very experienced bowler, while S Madrunga also has a good record 39 wickets in 23 matches. S Udugala and R Krisnan will support them both are very good bowlers.

A Bhuiyan can be a very good captain for PRS vs PCC match as he will provide points through both departments So, we can keep him as captain for our dream11 team.

S Sengupta has been in good touch in all matches, will be the most favorite choice for all dream11 users

S Wani is selected by only 21.18% of the users. He is capable of taking two plus wickets. So, we can expect him to boost our ranking in PRS vs PCC. 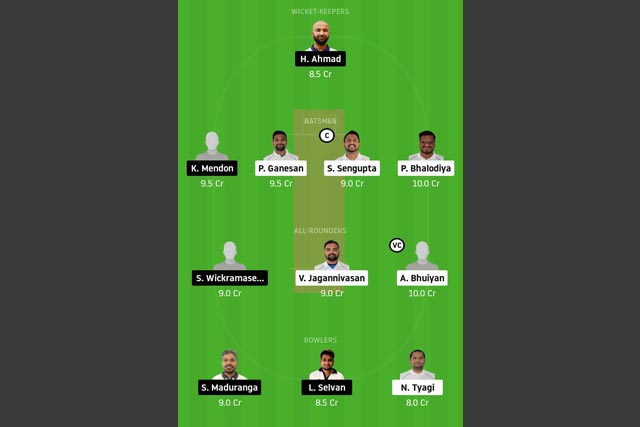