There’s a lot to take into consideration when you’re looking for the best PES vs LAH dream11 team. Today, We are going to discuss PES vs LAH 18th Match news, PES vs LAH fantasy Cricket prediction, and dream11 Expert data. This League is called Super League T20 2021 in the dream11 app.

Lahore Qalandars has played 5 games won 4 games while loosing 1 game and are strong side. They beat ISL by 5 wickets last game.

Peshawar Zalmi is also a very good side. They have played 5 games and won 3 game and are at number3 in points table.

B Dunk is wicket keeper for LAH will bat 3 down. He has been very consistant has scored 80 runs in last 4 PSL games. He scored 17 last game.

K Akmal will keep for PES. He is highly experienced player. Akmal will open. He has scored 69 runs in last 5 PSL game he played.

F Zaman, S Akhtar will open the innings for LAH. Both have been in good form.

F Zaman is very attaking player and must have in your team. He has scored 189 runs in his last 4 PSL games. He scored 17 last game.

S Akhtar always score very good player. He has scored 44 runs in his last 4 PSL games and 40 not out last game.

I Ul Haq will open inning he is mostly treated as long form player. He basically relies on timing.

S Rutherford will bat in middle order for PES and if required can bowl 1-2 overs.

D Millar is new signing for PES. He ihas been in great form was looking in brilliant touch in IPL.

H Zazai from Afg is opener and very attaking player. He is hit or miss type player.

M Hafeez will bat 2 down and is a very consistent batsman has been in superb form plays all around world, now will also bowl.
He has scored 186 runs in his last 4 PSL games. He scored 29 last game.

J Faukner will finsih inning and bowl in death. He took 3 wicket on his PSL debut.

A Butt will be finisher for PES nd bowl 3-4 overs. He is med pacer and has ability to take wickets.

F Allen from WES is a gun fielder and very good spinner and finisher who can make quick 30 runs.

R Powel is another player from WES who bowl medium pace and bat 3-4 down and his recent form is also good.

S Afridi, H Rauf will lead the pace attack for LAH, D Hussain and A Daniyal will assist them, while S Prassana and Rashid Khan will handle the spin bowling . S Afridi is very good bowler and their main pacer has been in very consistant form. H Rauf has knack of picking wickets.

H Rauf has picked 4 wickets in his last 3 PSL games.

Rashid Khan will be crucial as these pitches will suit hi and now he has too much experience of these grounds.

W Riaz and M Irfan will be new ball bowlers for PES. W Riaz will also lead side and will be assisted by experienced F Edward and U Asif.

F Edward has played for WES and is very experienced bowler. 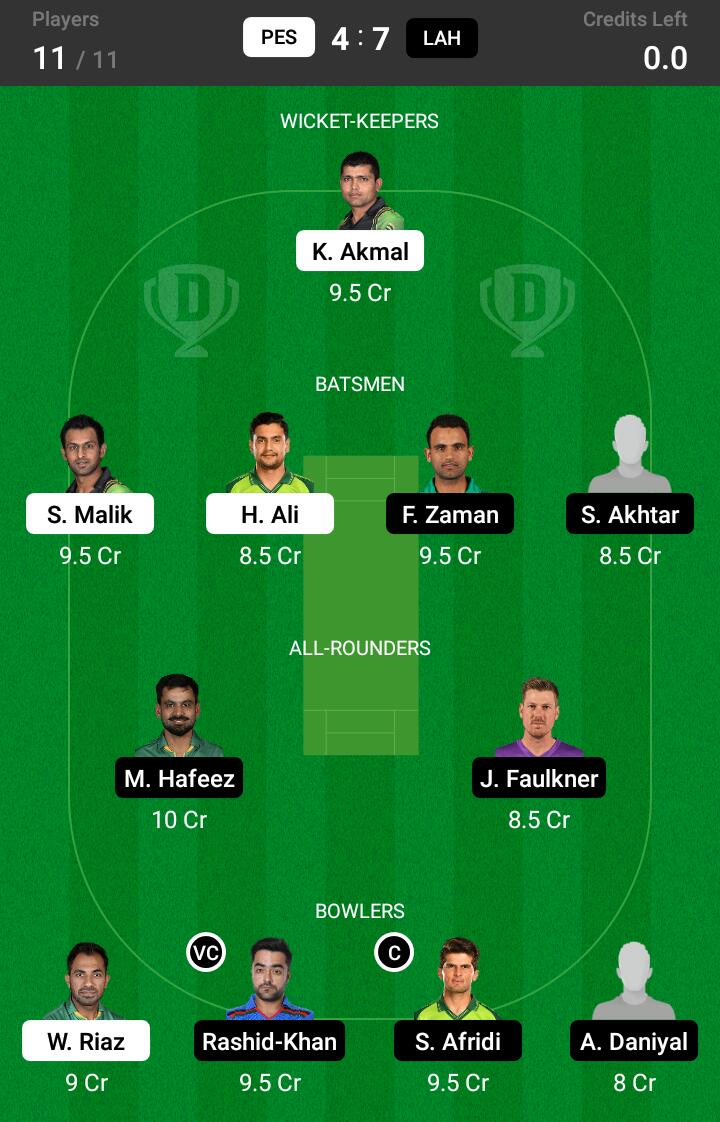