There’s a lot to take into consideration when you’re looking for the best ​​MTC vs BKK dream11 team. Today, We are going to discuss ​​MTC vs BKK 26th Match news, ​​MTC vs BKK fantasy Cricket prediction, and Expert data. This League is called BYJU’S KCA Club Championship T20 2022 in the dream11 app.

Masters Cricket Club has won 4 games from 4 games they have played and are very strong side.

BK-55 has also been inconsistent side has played 4 games won 2 lost 2.

V Rajis 1 of the best player for MTC who bat at top and also keep must have. He has scored 227 runs in last 9 games.

V Nayanar bat 4-5 down and also keep so try him as player in gl teams. He has scored 89 runs in last 9 games.

S Nizar will bat in top order. He is a powerful, very attacking player can also bowl 1-2 overs. He has scored 71 runs in last 2 games.

R Kunnummel will OPEN for MTC. He is a powerful, very consistent player. He has scored 116 runs and picked up 3 wickets in last 5 games

K Prasad will bat 1 down for MTC. He is a powerful, very consistent player. He has picked 3 wickets in last 4 games

Try Ananthakrishna and P Anfal in gl teams as they are good player but has not done anything yet.

A Chandran will bat 2 down for BKK. He is a powerful, very consistent player. He has scored 163 runs and picked up 6 wickets in last 9 games

M Sreeroop is proper batsman if early wkt falls can be crucial also bowl few overs. He has scored 99 run and picked up 5 wickets in last 6 game.

S Joseph attacking player has good t20 record in his name also bowl. He has picked 6 wickets in last 9 games.

G Gopinath and V Chandran will be the opening bowler for MTC, F Fanoos has good domestic record and very experienced bowler for them, VA Suresh will assist them and known for bowling economic spell.

A Farzeen and M Muhammad will be the opening bowler for BKK. S CP has been very experienced bowler for them, A Chandran will assist them and is good bowler. 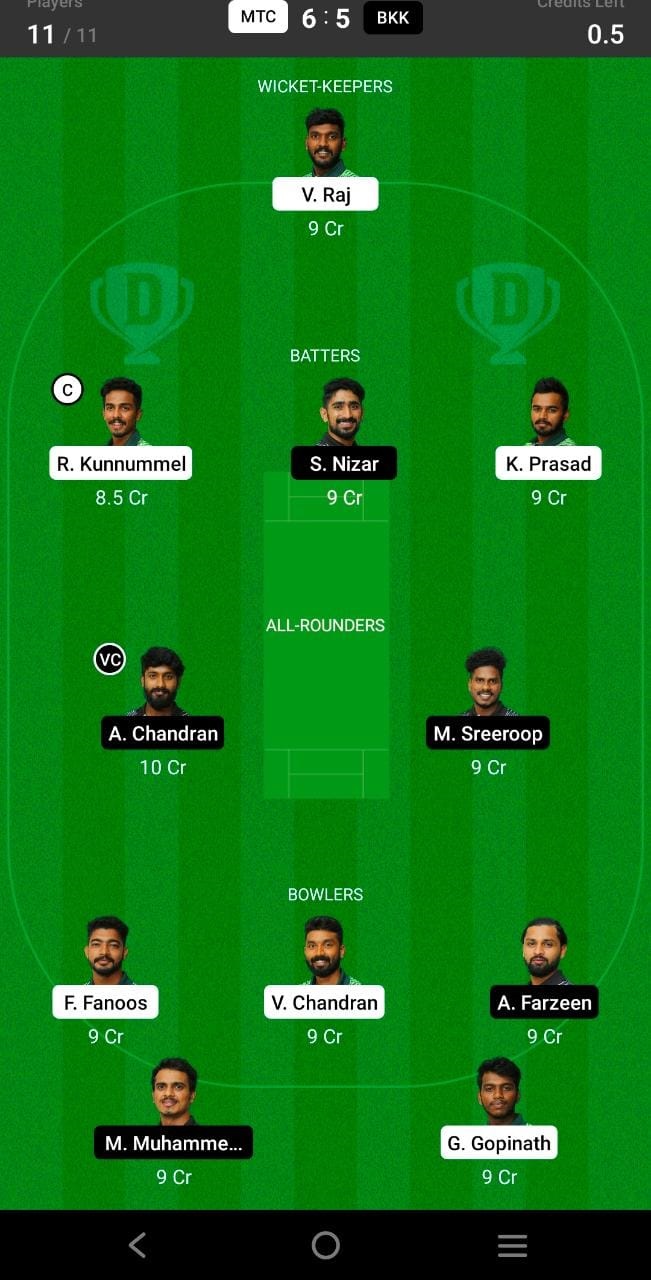