There’s a lot to take into consideration when you’re looking for the best LAH vs ISL dream11 team. Today, We are going to discuss LAH vs ISL 15th Match news, LAH vs ISL fantasy Cricket prediction, and dream11 Expert data. This League is called Super League T20 2021 in the dream11 app.

Lahore Qalandars vs Islamabad United, The 15th match will be played in Sheikh Zayed Stadium, Abu Dhabi on 9 June 2021 at 9:30 PM.

PSL will start from where it was ended. Lahore Qalandars has played 4 games won 3 games while loosing 1 game and are strong side.

Islamabad United is also very good side. They have also played 4 games and won 3 game.

B Dunk is wicket keeper for LAH will bat 2-3 down. He has been very consistant has scored 80 runs in last 4 PSL games.

R Nazir will keep for ISL. He is highly rated in domestic cricket. Nazir will bat in middle order. He has scored 34 runs in last PSL game he played.

C Munro is hit or miss type can destroy bowling lineup on his day, but lack consistency.

U Khwaza is expected to w bat 1 down and a good player to have in your team, very consistant batsman, will debut in PSL.

B King if plays will debut and open. He is basically timing base player so these pitches might suit him.

F Zaman, C Ferguson might open the innings for LAH. Both have been in good form and C Ferguson will debut this game can also bat 1 down.

F Zaman is very attaking player and must have in your team. He has scored 189 runs in his last 4 PSL games.

M Hafeez will bat 1 down and is a very consistent batsman has been in superb form plays all around world, now will also bowl. He has scored 186 runs in his last 4 PSL games.

Shadab Khan, F Ashraf will take care of the late-hitting job, will provide points with both bat and ball and Ashraf is very good medium pacer, He has scored 49 runs in his last 4 PSL games and picking 3 wickets.

while Shadab Khan is their captain has been in brilliant form, with bat coming at no 4 and He has scored 32 runs in his last 4 PSL games also picked up 4 wickets.

Hasan Ali and M Wasim will lead bowling attack for ISL. H Ali is most improved all rounder in last 1 year. So good choice of captain vc in gl team, while M Wasim has ability to take wicket in bunch.

S Afridi, H Rauf will lead the pace attack for LAH, D Hussain and A Daniyal will assist them, while S Prassana and Rashid Khan will handle the spin bowling. S Afridi is very good bowler and their main pacer has been in very consistant form. H Rauf has knack of picking wickets.

H Rauf has picked 4 wickets in his last 3 PSL games.

Rashid Khan will be crucial as these pitches will suit hi and now he has too much experience of these grounds. 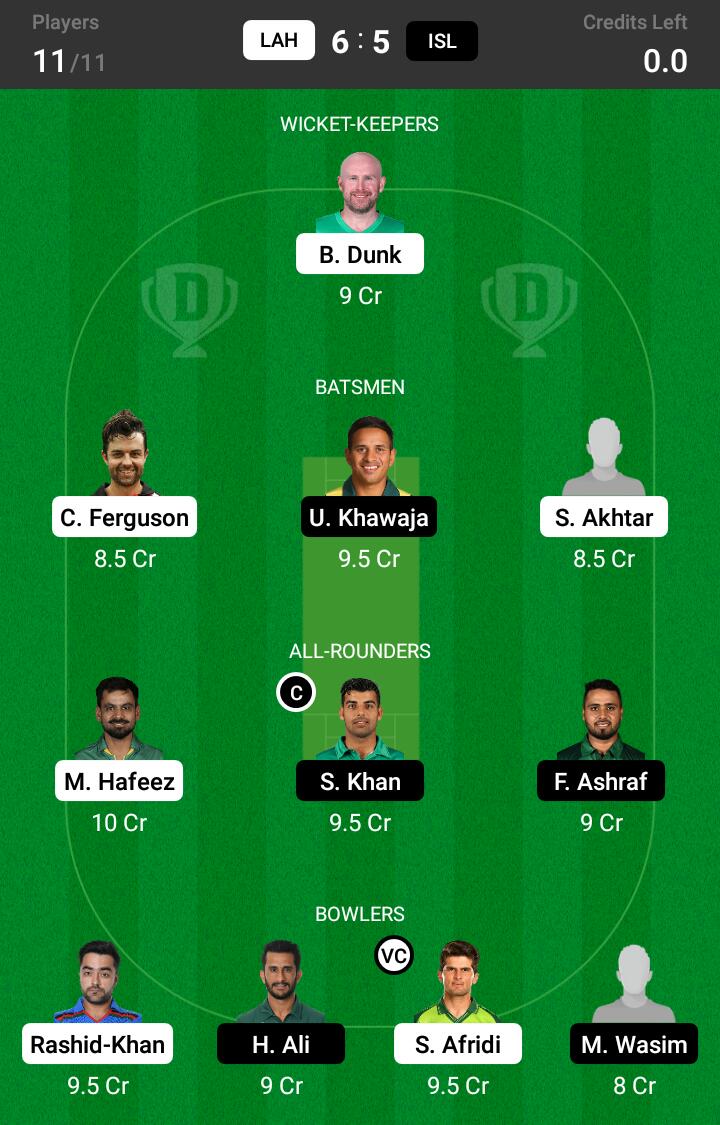