KKR lost the opening game against MI by 49 runs but in there 2nd game beat RCB by 7 wickets and won 3rd game very strongly won the 4th and 5th game in the high scoring encounter, has been up and down but has won the last 2 games now and are having winning momentum, while RCB has been good side this season has won 6 games while losing 3 games, has been in good winning rhythm.

Shubman Gill and Rahul Tripathi open the innings of KOL

Nitish Rana will bat at one down. Dinesh Karthik and Eoin Morgan will take care of the middle-order batting. Andre Russell and Kamlesh Nagarkoti will do late hitting job.

Pat Cummins and L Ferguson will lead the pace attack. Shivam Mavi and Russell will assist them. K Yadav, Varun Chakrborthy will do the spin attack.

Devdutt Paddikal and Aaron Finch will open the innings, Virat Kohli will bat at one down, AB Divilliars and Washington Sundar will bat in the middle order, Shivam Dube will do late hitting.

Navdeep Saini, Isuru Udana will lead the pace attack, M Siraj and C Morris will assist them in powerplays, Y Chahal and W Sundar will take care of the spin bowling.

In the last season, Shubman Gill averaged 47 as opening order batsmen. He is very good at finding gaps and hitting sixes, which he showed 2nd the last game took his team home will his brilliant inning.

Rahul Tripathi showed why he is the best opener in IPL when he played for Pune very attacking player, If T Banton plays then he will open very attacking batsman, while Tripathi demoted to 7th.

Sunil Narine will try to hit all balls. He played well in recent CPL matches, has not been successful yet but he plays like this only on his day will score 50+ in few bowls. He will surely add dream11 points from both units. So, don’t miss him, might also miss this game.

Nitish Rana and Dinesh Karthik will try to stand for a long time. Both will not lose their wickets easily.

Mostly Eoin Morgan will get less batting chance but when get a chance always score. Because KKR will bring Russell at any position.

Andre Russell will do quick runs and everyone will wait for his batting. He also handy in taking wickets.

Pat Cummins will strengthen the bowling unit. Lockie Ferguson was exceptional in 1st game bowled with raw pace must have from the KOL bowling unit. Kamlesh Narakoti will assist the bowling lineup with his good pace can also bat well down the order.

Varun Chakrborthy is a surprise package for KKR spin this year as K Yadav not looking in good shape.

Aaron Finch, Devdutt Paadikal will give a massive opening. Both are attacking batsmen, D Padikal had been in very good form has scored 3 50+ score in 8 games, he is a very good player has been the highest run-getter in Syed Mushtaq t20.

Aaron Finch has come back to form 2nd the last game scoring a brilliant half-century very dangerous player on his day can score big.

Virat Kohli is very consistent, He is technically very strong, Lead side number 1 player across format So, we can surely expect 45+ dream11 points from him, I came back to form last game took his team home with a special inning.

AB Devilliers surprised everyone with the form, as he was playing after a long time very dangerous player has been rock solid form, G Mann is a very good domestic player last time he batted for RCB scored a half-century.

Shivam Dube will act as the RCB pillar. He will do his best in both batting and bowling. Don’t miss him in RCB vs KKR Dream11 Team.

Navdeep Saini and C Morris will bowl in starting over and death both are wicket-taking bowler, while, W Sundar will try to restrict the run rate.

Shubhman Gill is the best choice for captain and vice-captain. Because he will score dream11 points from both units as he is a gun fielder.

Virat Kohli can be taken as an RCB vs KXIP team captain. He has a T20 average of 50.8. If the game is set means, We can expect a century from him.

D Paddikal is another option for VC choice. He may again score this game very Dyanimc player has been the highest run-scorer in Syed Mushtaq.

A Russel, A Finch recent records are not good. But they are very good at playing IPL. So, You can pick them also in Captain and Vice-captain choices.

To crack the IPL match 20 crore league, You should take more risk by avoiding high credit players. Use below players in your dream11 team Grand league.

K Nagarkoti is selected by only 5% of the dream11 players. His domestic records are strong.

S Narine is selected by only 5% of the dream11 players. His IPL records are strong if plays.

M Siraj is selected by only 15% of the dream11 players. His domestic records are strong.

W Sundar is selected by only 40% of the dream11 players. His domestic records are strong. 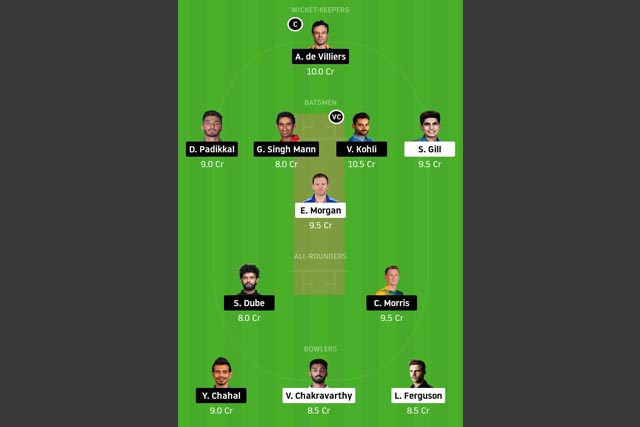