There’s a lot to take into consideration when you’re looking for the best KOL vs BLR dream11 team. Today, We are going to discuss KOL vs BLR 30th Match news, KOL vs BLR fantasy Cricket prediction, and dream11 Expert data. This League is called Indian Premier League 2021 in the dream11 app.

Kolkata Knight Riders vs Royal Challengers Bangalore, The 30th match will be played in Narendra Modi Stadium, Ahmedabad on 3 May 2021 at 7:30 PM.

Kolkata Knight Riders are at number 6 in points table. They have won only 2 game while loosing 5 games. This match lot of changes are expected as told by their coach B Mecculam.

RCB are at number 3 on points table winning 5 games while loosing 2. They lost last game against PBKS but has been superb before that.

Dinesh Karthik is playing as a finisher. He will also provide keeping points. He has scored only 1 40+ score in 6 games. Try him in only gl teams.

AB de Villiers has looked in prime touch and scoring every game. He is very dangerous player will also provide keeping points. ABD is expected to bat 3 down. He has scored 207 runs in 7 games with 51-75 average.

Shubman Gill has Failed in all game but very good player will look to score big this game. He scored 40+ last game and might be indication that he has got back his form.

Eoin Morgan form has been worry for KKR. He is not able to score even double digit most of the time.

Nitish Rana is opening . He was best player for KKR in 1st two game but after that not done anything. He might be replaced by Karun Nair this game. Karun Nair is timing base player can score big if plays.

Rahul Tripathi has been best batsman for KKR. He is getting start every game but not able to convert it to big score.

Virat Kohli is very consistent, number 1 player across format. He has scored 198 runs in 7 games this season.

Devdutt Padikkal has been in good form has already scored hundred and has 39 average so far.

Andre Russell will do quick runs and everyone will wait for his batting. He also handy in taking wickets. He looked dangerous in last few games. KKR are wasting him by sending 5 down but this game he can be promoted up the order.

Shakib Al Hasan or S Naraine whoever play will handle both the bowling and batting unit. Both has ability to take single handly his team home. Sunil Naraine if open will be crucial. He is not able to pick much wicket with ball.

G Maxwell is batting 2 down and can also bowl few over of off spin. He has scored 223 runs in 7 games and is among top 10 run scorer.

W Sundar has been most economical bowler for RCB since last 2 year. He is not getting much over to bowl this season and was dropped last game.

Daniel Christian if play will finish inning for RCB and will bowl 2-3 overs. He did not play last 2 games and not looking in good touch.

D Sams is very good death bowler. He can also bat with high SR lower down the order.

S Ahmad left arm orthodox has been bowling well. He can also bat well in somegames also sent 1 down.

V Chakrworthy will take maximum wickets for KKR. He has been pick of the bowler for them. He is bowling in powerplays so batsman can target him and can loose wicket.

P Krishna and S Mavi domestic records are good. But they needs to improve more in IPL matches. P Krishna bowl with raw pace but not picking much wickets.

S Mavi bowling mostly 4 overs at start. P Shaw scored 6 four in 1st over against him. He can be replaced this game by Kamlesh Nagarkoti.

Pat Cummins has been scoring run down the order and bowling 2 overs in death. Dont misss him as he can easily pick 2+ wickets.

Harshal Patel has picked 16 wickets in 7 games. He is purple cap winner at the moment.

Y Chahal has not been in great touch this season but he is very experienced player take him in your gl teams. 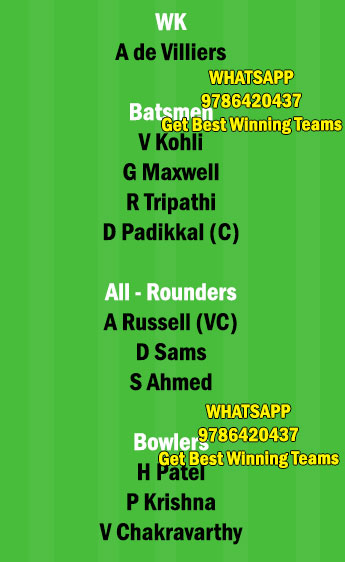