Hobart Hurricanes vs Adelaide Strikers, The 8th match will be played in Aurora Stadium, Launceston on 15 December 2020 at 1:45 PM.

He is a safer pick amongst the two keeping options and also has been chosen by more than 90% users. Can tried by dropping in a GL team where you could try Nielsen.

Can be tried in GL as there are two keeping options only. Can avoid in HUR vs STR dream11 SL teams.

He comes at No.6 but has batted really well in both games which could promote him too. If batting first, he could be a safe pick for HUR vs STR today match.

He is a must pick and a safe pick considering his current form.

He is an opener and has done well in the English T20 Blast over the years and looked good in the previous game too. Can try in SL.

He was one of the leading run scorers in the 2018-19 season and played well in the previous season too. He is also a hit or miss player and can be tried dropping in risky SL teams, but still a safe pick considering the selection percentage.

He is a hit or miss player. He goes big or goes soon. Try in GL and drop in risky SL teams for HUR vs STR today match.

He looked to be tremendous in the previous season and just the first game can’t prove his worth yet. He is a must pick in HUR vs STR dream11 GL and would be your punt pick.

He is a good batsman and isn’t an easy one to dislodge. He can pick up wickets too. Safe pick nonetheless.

Not doing too much with the ball currently but has picked up wickets in the past seasons. He showed his BBL worth in the previous game against the same side and can go big again. Hit or miss player. Try dropping in a couple of HUR vs STR dream11 GL teams.

He has been a consistent wicket taker over the years for the Hurricanes and is undoubtedly a must pick considering the fact that he’s picked up 5 wickets in 2 matches and is high on confidence.

He has showed his worth with the bat and got his team to a winnable position from a 102/9. He is a must pick considering his ability to pick wickets in each game too.

He showed extreme class with the bat coming at No.11 and has done well with the ball in the English T20 Blast too. Can be a good GL punt pick.

He is a must pick and everyone knows his worth in this format of the game.

He bowls in sheer pace but lacks accuracy at times. Picked up a couple wickets against the same side in the previous game and can do well again too. Try dropping him in GL or risky SL team though.

Safe pick and a consistent wicket taker for the side since the last two years. Must pick in SL for HUR vs STR dream11 team.

Can try avoiding in SL but do try him in atleast one GL team. He was the leading wicket taker for this team in the previous season and can do well.

Will give safe 25 points and ends up collecting a wicket in almost every game he plays.

Coming back from retirement and struck 2 wickets against the same opposition in the previous game. Load of experience to support him too. Worthy GL try.

D’Arcy Short, James Faulkner, Rashid Khan and Matt Renshaw are safe and good choices for HUR vs STR dream11 C/VC in small leagues as all 4 of them can contribute well with both bat and ball in the game.

Colin Ingram, Jake Weatherald, Phillip Salt and Riley Meredith can be risky hit or miss players and perfect to try in GL teams as HUR vs STR dream11 C/VC in the same. 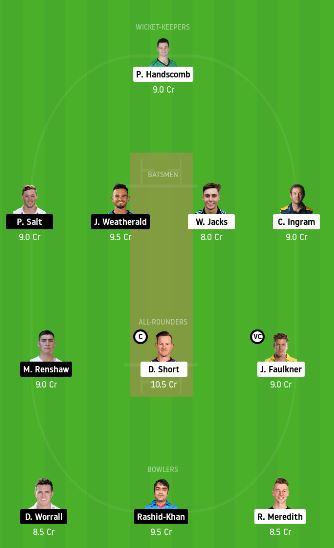 If you are like our HUR vs STR dream11 prediction. Please share this article with your friends, who are playing dream11 fantasy leagues. Don’t forget to follow us onTwitter, Telegram, and Youtube for the best dream11 tips and tricks.