Galle Gladiators vs Kandy Tuskers, The 19th match will be played in Hambantota on 10 December 2020 at 8:00 PM.

His only 50+ score came in the opening game and then has never been able to cross 50. His consistency has taken a halt but is still the safest option amongst the two keepers.

Fun Fact – He has just scored 4 in every alternate game and the next game could be another 4 or a low score below 10. Take that risk by dropping him in GG vs KT dream11 GL

He has looked good with the bat. Unfortunate in the previous game, but bigger a reason why he could be a good pick for this game as he’d like to go big.

Gunathalika has been in tremendous form and has scored 30 or more in every single game. He is the most consistent batsman in this season and final league fixture for this team, he’d go big and keep their chances of qualification alive somehow. He is the safest and a must pick for GG vs KT today match.

He has looked in good touch and has been starting well. He can convert them too and can give good points. Must try in GL.

He is the skipper of the side and has finally found some form with the bat after consistent failures. He can be a good pick for your GG vs KT dream11 teams.

He can be one of those players who can be left out of contention from keeping in your teams. Batting at No.7, hasn’t given points on the field nor does he bowl. Should be an easy choice.

Hit or miss player. Goes aggressive on every delivery and he can go big, but max chances are he’d be dismissed early due to that approach. GL pick for GG vs KT today match.

He has shown consistency with the bat and faltered in the last two games. He’s expected to do well in this game. Must pick in SL teams.

He started off this season well but hasn’t been able to convert his starts since the last few games. He is a worthy try for GL though.

He has been the most consistent player with both bat and ball and has been somehow keeping this team alive in terms of their chances and carrying this team by batting well in the middle order and with the ball in his 4 overs by constant wickets.

He looked really well with both bat and ball in the previous game and could carry on with his form. Considering the All Round options, he could be the safest choice to choose from GG vs KT today match.

Since the hamstring injury he incured in the first game, he has just bowled one over in the last 2 games, which is indicative of his inability to bowl properly yet. He’s being used as a batsman at No.6 and isn’t certain to bat but can give some points if he gets atleast 5 overs to play.

He hasn’t done anything worth noting. He bats at No.8 and mostly has just bowled one over irrespective of how he good or bad he bowls. Can be a GL pick due to the less number of options in this section.

Has neither been consistent in terms of taking wickets nor has he gotten enough chances to show his worth with the bat. An easy choice to avoid from your GG vs KT dream11 teams.

He has somehow regained the confidence and has been bowling amazingly well and in good tight lengths. His wicket of Stirling yesterday indicates how well is he using the swing in the powerplay overs. He is a safe and a good pick for GG vs KT dream11 SL teams.

He will give you a 25+ point game surely and he is a very safe pick and has looked well with the bat too. Can be a good pick in SL teams.

Wickets have been helping spinners and he has been bowling well too and using the pitches to his advantage. He is a good pick for GL.

Just played in the last 2 games and has looked good in both and has picked up wickets. Can be a good pick for GL, and SL if you’re ready to make a team with more than 3 bowlers.

Played in the previous game yesterday and picked up a couple of wickets and brought back his confidence into action towards the end stage of the season. Can be a good GL pick for GG vs KT today match.

Has been bowling well in almost every game and has been giving 25+ points consistently and has looked to be a safe pick.

Asela Gunaratne and Danushka Gunathalika are by far the safest and the best choices for GG vs KT dream11 C/VC for Small Leagues and can easily be choices for Grand Leagues too.

Other than the two mentioned above, Kusal Mendis and Ahsan Ali are probably the only two options who are worth trying out as GG vs KT dream11 C/VC in Grand Leagues. The others can give points but mostly as normal picks 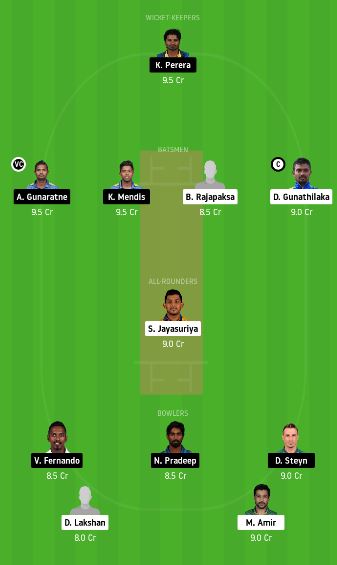