There’s a lot to take into consideration when you’re looking for the best FBA vs GGC dream11 team. Today, We are going to discuss FBA vs GGC 18th Match news, FBA vs GGC playing 11, FBA vs GGC fantasy cricket prediction, and dream11 Expert data. The Bangabandhu T20 Cup is called Bangladesh T20 in dream11 leagues.

Fortune Barishal vs Gazi Group Chottogram, The 18th match will be played in Shere Bangla National Stadium on 10 December 2020 at 6:00 PM.

Amongst the keeping options, he’s the safest and the most consistent pick. He has been playing on high confidence and has been batting well too. A must pick in FBA vs GGC dream11 SL.

He is the skipper of the side and has been giving good starts but hasn’t gotten too many deliveries to face and goes for the big shots early and has given the wicket due to that as well. He can be a GL pick if you’re dropping Das in any team.

He has been a very experienced player and been in the circuit since a long time out here. He has been playing consistently and is a must pick for your FBA vs GGC dream11 team.

He hasn’t fired too much other than in the previous game where he scored a century. He’s looking good now and can be a good GL pick and after the previous knock, maybe in risky SL teams too.

He’s batting quite down the order and didn’t even get to bat in the previous game. He can be kept in GL teams where you’re dropping the top order players. Can be left out in SL teams.

He hasn’t looked too well with the bat other than the previous game and can be left out in FBA vs GGC dream11 SL teams.

He’s also a safe pick. He’s an opener and has been bowling in every game too. He is an important pick for your FBA vs GGC teams.

He hasn’t been batting much as he comes quite down the order but has been picking at least a wicket in almost every game. Can be a safe pick but do try dropping him in GL.

He is surely the best and the most crucial pick for your teams. He has been in the dream team in every game and has to be in your FBA vs GGC dream11 team nonetheless.

He goes big with more than 75 points or stays below 25. He is a perfect example of hit or miss with the ball and can be a crucial pick for your teams. Do try in SL due to his recent performances.

He has been picking up atleast 25 points in every game and has been consistently bowling well in each game. He is a good pick for your dream11 teams.

He is a good GL pick as he has taken 0 wickets in two of the 5 games too. He hasn’t been selected by too many people and can be a good GL punt pick.

One would expect a bit more from him with the ball, but he’s still been giving points with the ball or on the field and can be a good GL pick. Can drop in Risky FBA vs GGC dream11 SL teams.

Whenever he’s played, he’s contributed for the team and has done well with the ball. If he continues to play, he’d be a good GL punt pick.

Liton Das, Tamim Iqbal and Soumya Sarkar are safe options for FBA vs GGC dream11 Small league teams and can be tried as safe choices.

Mosaddek Hossain and Mustafizur Rahman other than the Small League options given, are good GL C/VC choices. Rest can be kept as normal players but these are good FBA vs GGC dream11 C/VC choices. 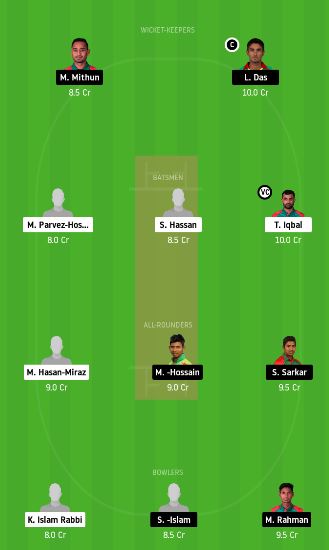