CTT has won 2 games and lost 2 games, while UCC is the strong side winning 2 games while losing 1 game.

N Aslam, S Khawar will open the innings for CTL, S Khawar is a very attacking player who has scored consistently and bowl, while N Khan very good player.

M Argham Khan will bat at one down and is a very good player, play very attacking cricket is a propper allrounder.

R Zaman, M Safadar, S Latif, A Azam will handle the middle-order batting. M Safadar is a must-have player very experienced and very good hitter, R Zaman is a proper batsman if early wicket falls can be crucial also keep, S Latif has been consistant with the bat but does not bowl A Azam also a must-have player will finish the inning and also wicket-taking bowler must-have player.

S Shaukat, A Azam are an opening bowler for them will also bowl in death so high chance of picking wickets and both have brilliant domestic record must-have player, S Agha, M Yasin, N Hussain will support them, both are very experienced and can easily pick wickets.

P Dhiman, M Ali will open the innings for PMCC. Dhiman must-have an experienced player, while M Ali is an average player.

A Butt will bat at one down and is a very good player, is a good player to have in the team also has good domestic record, also bowl

S Hashim Mir, J Iqbal, I Hussain, R Adeel will handle the middle-order batting. S Hashim Mir is best if the top-order fails and a good player to have a good domestic record. I Hussain is a very good allrounder who has the potential to pick wickets but did not bowl in the last game, R Adeel is their best allrounder must-have player.

N Ali, A Shehzad the opening bowler for them, N Ali has a knack for picking wickets and has a good domestic record, I Hussain will assist them and has been in superb touch picking with an economic spell. P Dhiman, R Adeel is their 4th and 5th bowler also chipping with wickets.

M Argham can be a very good captain for CTL vs PMCC match as he will provide points through both departments So, we can keep him as captain for our dream11 team.

A Azam has been in good touch in all matches, will be the most favorite choice for all dream11 users

S Shaukat is selected by only 21.18% of the users. He is capable of taking two plus wickets. So, we can expect him to boost our ranking in CTL vs PMCC. 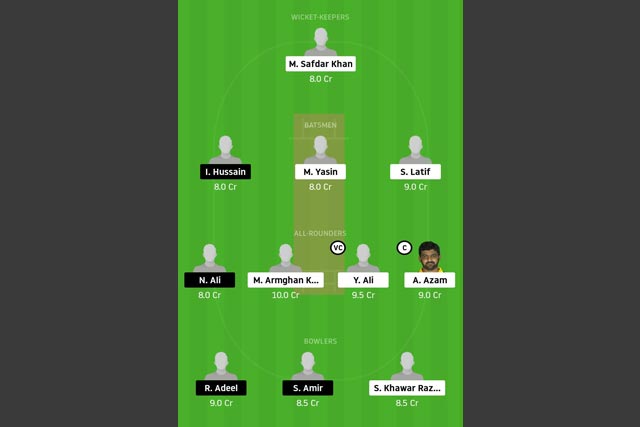