Colombo Kings vs Galle Gladiators, The Semi Final match will be played in Hambantota on 13 December 2020 at 8:00 PM.

Has scored 2 50s in this season and has stayed unbeaten in the previous two games. Also giving constant points with catches and runouts as a keeper. The safest keeper choice for your CK vs GG dream11 team. A must pick for your side.

Has been giving good starts and looked in good touch and finally converted into a good score in the previous game, but still has been 25. Giving good points in all games and a good GL option.

A very important pick and must have in all teams. if he picks a wicket, it would be an added bonus. He has scored 30+ in every game and has 4 50s in 8 matches.

Andre Russell(CK)(3 down and 3 overs)

Even though bowling in every game, he’s been given under the category of batsmen. No need to introduce this player. One of the most destructive T20 players in the world and a must pick nonetheless.

He was retired hurt in the previous game and would have to wait for the toss to see whether he plays or not.

For all those who don’t follow English T20 blast, he’s one of the most consistent batsmen for them. He hasn’t gotten going yet in this season but can be a good CK vs GG dream11 GL punt pick as he’s a No.3 batsman.

He’s the acting skipper for the team in the absence of Afridi and has finally been doing well with the bat. He’s been good for Sri Lanka in the International arena. Try him in risky SL teams and GL.

Looked good with the bat but playing at a strike rate just above 100, even though is an opener. Hasn’t crossed 30 yet in the two games that he’s played but as an opener, he deserves a place in atleast one GL team. Can avoid in CK vs GG dream11 SL.

Ashan Priyanjan(CK)(6 down and 1 over)

If he gets a good chance, he can do well. Very risky pick.

Bowled just in the last game and picked wickets, but has looked a bit dicey with the bat. Risky pick.

Angelo Matthews(CK)(2 down and 2 overs)

Opens the bowling and bowls a couple in the powerplay. Also bats at No.4 for the team. He’s the skipper and hasn’t fired yet with the bat. He can fire anytime soon. Do not miss out on him in SL as he’s also the highest selected all rounder by the fantasy users.

He is a constant performer in ODDs in Sri Lanka but hasn’t done too much in the T20s yet, but has given atleast 25 points in every game by performing with either the bat or ball. Against a team that’s not win a single game, he could create havoc with the ball. He’s a good GL punt pick for CK vs GG today match.

Shehan Jayasuriya(GG)(5 down and 3 overs)

Hasn’t been able to bat well and has had a strike rate of less than 100 in his previous 3 outings which has showed that he’s out of touch. He’s a good player but is still struggling with the bat and hasn’t done much with the ball too. Can be avoided but if you’re making 11 GL teams, then try him in a couple.

He can be avoided in SL teams. Can try in CK vs GG dream11 GL if you want.

Has proven to be the most unplayable leg spinner in the last few games especially on these wickets which have started helping spinners. He’s a crucial pick and a must have for CK vs GG dream11 SL and GL teams.

Has been bowling well and has taken atleast one wicket in 4 of his last 5 games that he’s played. He has been giving constant points with the ball and against a struggling batting unit, he could be a very crucial pick for your CK vs GG teams.

He’s actually a really good bowler and has been picking consistent wickets in the previous few games. He is a safe option for SL teams.

Has taken wickets in all games that he’s bowled in, and has been impressive with the ball even on these spin wickets. He’s a good GL pick nonetheless.

He has been giving runs in excess of 10 per over in all the games and has been a certain wicket taker but has been doing well. The wickets are helping spin as the tournament has progressed. Can be a GL try.

Angelo Matthews, Dinesh Chandimal, Azam Khan and Qais Ahmed are all good prospects for CK vs GG dream11 C/VC for Grand League teams. They’ve given consistent points in Dream11 and can do well yet again.

Andre Russell and Danushka Gunathalika are by far the safest choices for dream11 C/VC in this game. They have been consistent performers and have been doing constantly well for their team. 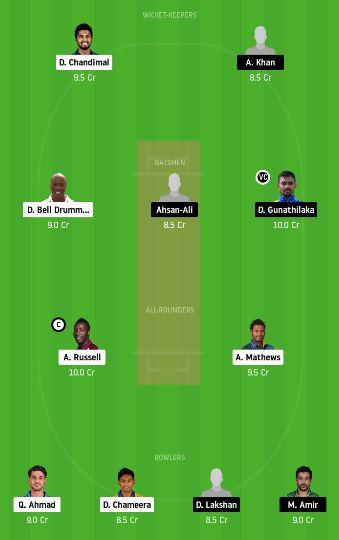