There’s a lot to take into consideration when you’re looking for the best WOR vs LAN dream11 team. Today, We are going to discuss WOR vs LAN 21st Match news, WOR vs LAN fantasy Cricket prediction, and dream11 Expert data. This League is called English T20 Blast 2021 in the dream11 app.

Lancashire was superb last season finished at number2 winning 5 games and loosing 3. This season also they have played 2 game won both.

Worcestershire 1st match was tied while won 2nd game by 32 runs and are good side.

D Vilas will be finsiher for the side has been in superb touch bats 3 down so does finish job for his team. He has scored 31 run in last 2 games.

J Butler is one of the best t20 player and also keep and can bat at any position which is rare will be captain choice. He is batting 2 down . He has scored 52 run in last 2 games.

B Cox is batting 5 down is very good hitter of ball but batting very low so try only in gl teams. He has scored 40 run in last 2 games.

A Davies a powerful left-hander very attaking player must have player can also keep. He is batting 1 down.

F Allen from NZ was highest run scorer in NZ domestic T20s with 150+ SR was also signed by RCB. He is very attacking player can change game in few overs. He has scored 102 run in last 2 games.

K Jennings if plays is also good player very experienced and very good batsman. He mostly opens or bat 1 down.
J Bohanon if plays will bat at one down and is good player, play very attacking cricket can score big, but his position is not fixed in lineup.

SJ Croft plays good inning down the order, he is batting allrounder. He is not getting much chance to showcase his talent here.

R Whitley is very consistent batsman for WOR. He is batting 2 down and has been in good form. He has scored 65 run in last 2 games.

J Libby is hit or miss type of player and batting 3 down. He has scored 64 run in last 2 games.

L Wood and D Lamb are the opening bowler for them will also bowl in death so high chance of picking wickets, L Wood Jones also very good allrounder.

M Ali is best allrounder from both side. He has been in good form batting 1 down and bowling 4 overs. He has scored 58 run in last 2 games and picked up 4 wickets.

B D’Oliveria is opening inning and also bowling 1-2 over. He played very slow last game might be demoted this game.

T Hartley, T Bailey are the opening bowler for them will also bowl in death so high chance of picking wickets.

M Parkinson is there main spinner and has been in good form. He has ability to take wickets. He has picked 5 wickets in 2 games.

C Morris and B Dwarshius are 2 new ball bowler for WOR. B Dwashius is death over specialist which he does regularly in Big Bash. C Morris has picked 4 wickets in 2 games.

I Sodhi is main spinner for WOR. He is one of best leg spinner in this format in world. He has picked 2 wickets in 2 games. 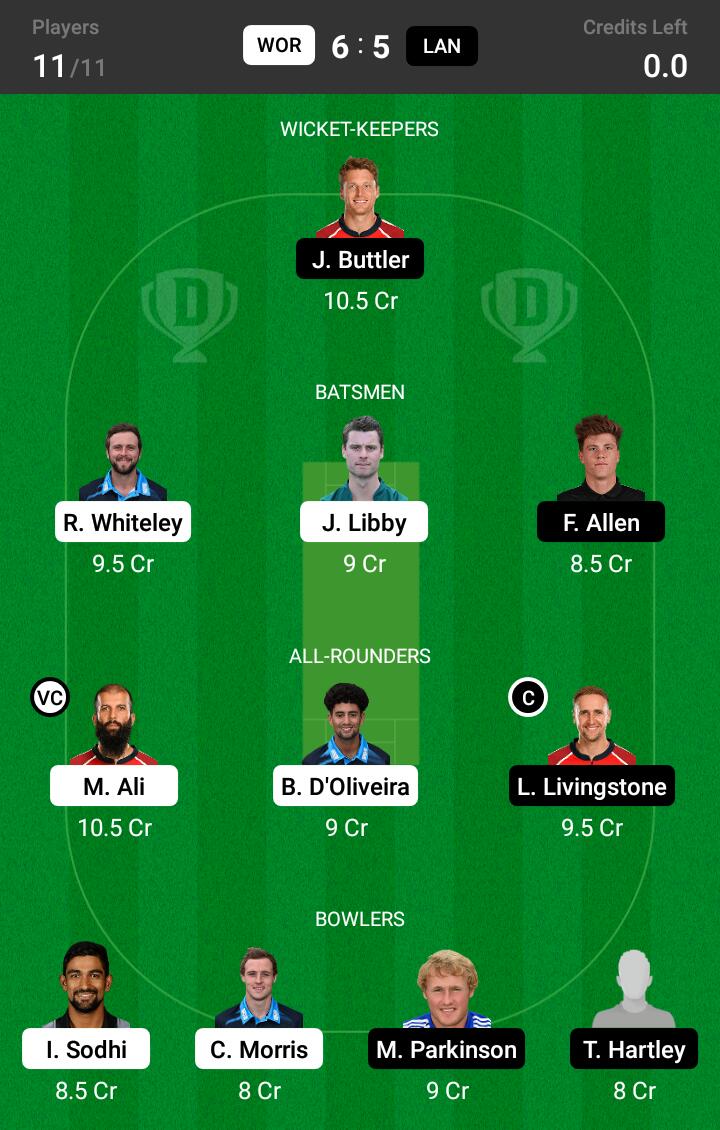