There’s a lot to take into consideration when you’re looking for the best TIT vs WAR dream11 team. Today, We are going to discuss TIT vs WAR Match news, TIT vs WAR fantasy Cricket prediction, and dream11 Expert data. This League is called South African T20 Challenge in the dream11 app.

Pitch Report: The pitch here at Durban Stadium is in favour of bowlers especially Pacers, However spinners also take good amount of wickets. Average batting score at this stadium 150.

Titans won their opening match against Knights by 6 wickets. They has world class player comparing with cobras.

Dean Elgar and Theunis de Bruyn opens the innings . Dean Elgar is a class player, he can score a half century.

Warriors lost their opening match against Lions by 4 wickets. They failed in both bowling and batting departments in last match, however they have good players to comeback strong.

Gihahn Cloete and JJ Smuts will open the innings. Both are good attacking players and JJ Smuts is a key all-rounder, he is playing opening is an advantage.

Glenton Stuurman, Ayabulela Gqamane and Anrich Nortje are key bowlers. A Nortje and A Gqamane can pick up 2+ wickets.

Pitch is eventually helping bowler. So we need to take more possible bowlers in our squad. And again we can expect a low scoring match.

1. C Morris is predicted to score half century and will pick up 1+ wickets.

2. Siyabonga Mahima and Shamsi is expected to take 2+ wickets. 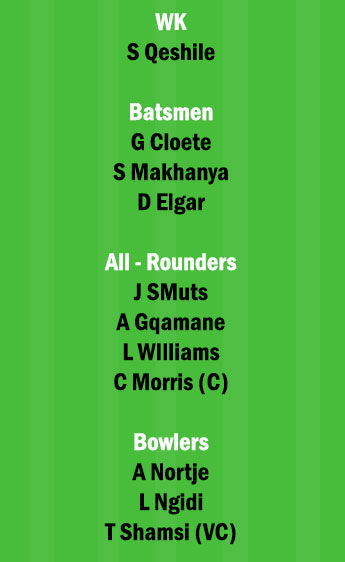