There’s a lot to take into consideration when you’re looking for the best TIG vs TUS dream11 team. Today, We are going to discuss TIG vs TUS 8th Match news, TIG vs TUS fantasy Cricket prediction, and dream11 Expert data. This League is called BYJU’s Pondicherry T20 2021 in the dream11 app.

Tigers XI vs Tuskers XI, The 8th match will be played in Cricket Association Puducherry Siechem Ground on 8 August 2021 at 1:30 PM.

Tigers XI is an very inconsistent side some day they look strong, other game very ordinary . They have played 2 game winning 1 while loosing other.

Tuskers XI has lost both games they have played but are better side then the result shows.

Y Avinash is TUS best player open inning also keep must have player. He has scored 58 runs in last 2 games

A Raj R will bat at one down and is very good player, is a very skilful player, will also look to contribute some runs in the middle order. He has scored 7 runs in last 2 games

K Arvind will open the innings for TUS. He is a powerful, very attacking player can also bowl 1-2 over but does not have good record till now. He has scored 90 runs in last 2 games

R Raghupathy will bat at one down and is good player, play very attacking cricket can hit six with ease also can bowl overs if needed. He has scored 79 runs in last 2 games.

N Kangyan is best batsman of TIG who was also consistent last season but but looked off till now otherwise good captain vc choice. He has scored 45 runs in last 2 games.

Try A Agarwal and A Karthik in gl teams as they are good player but has not done anything yet.

F Ahmad is proper batsman if early wkt falls can be crucial also bowl few overs. He has scored 38 runs and picked 2 wickets in last 2 games.

S Jasvanth will finish the inning, basically a bowling allrounder. He has scored 14 runs and picked 2 wickets in last 2 games.

A Andrew and P Ratnaparkhe are 2 very good batsman who can also bowl but has not done anything yet.

J Jacob and M Kumar are the opening bowler for TIG will also bowl in death so high chance of picking wickets, V Raja and S Kumar will support them, both looked promising.

Arvindraj and F Ahmad will be the opening bowler for TUS, Arvindraj has good domestic record and very experienced bowler for them, S Kansal and VS will assist them and known for bowling economic spell. 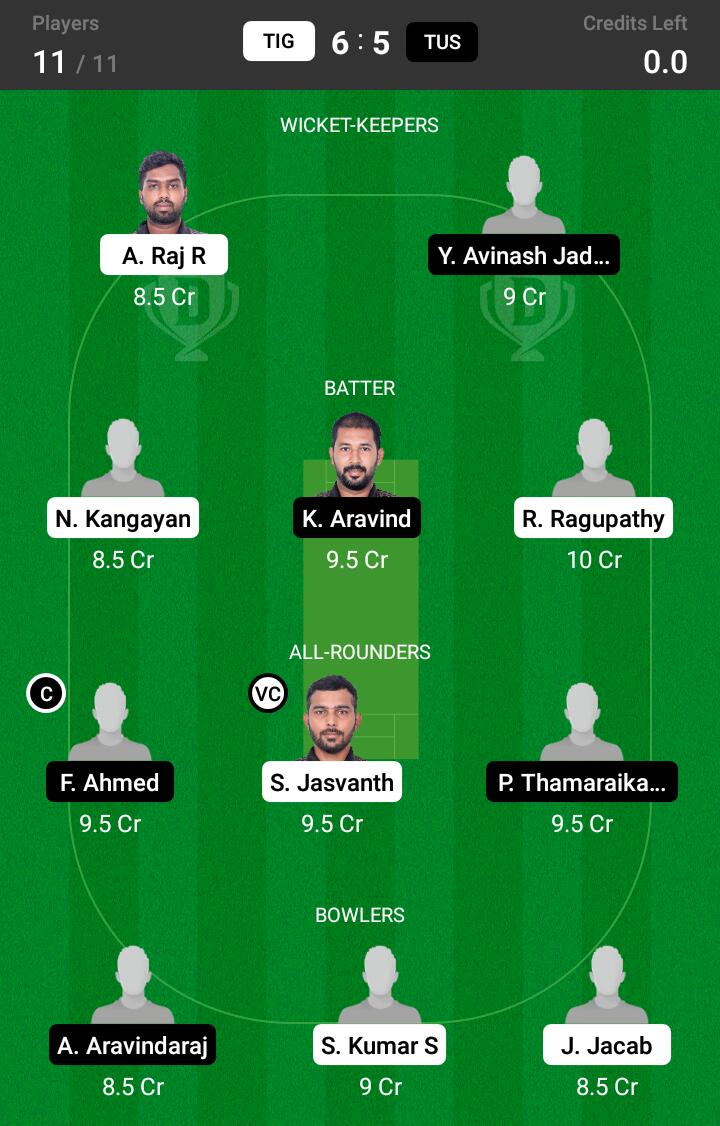