Sydney Thunders vs Hobart Hurricanes, The 43rd match will be played in Manuka Oval, Canberra on 18 January 2021 at 1:45 PM.

He hasn’t been playing the way one would expect him to. He is playing at No.4 just as compared to McDermott who’s opening and can be tried in GL since he has a better ability and he proved it in the game when he stepped up and scored an 83.

He is the safest option for your teams and is high on confidence ever since his test century in the warm up game against India A. Although the opening position hasn’t suited him much yet in terms of consistency, he’s still a safe pick. Can pick any of the keepers in GL.

He has been a consistent batsman but if batting second, you can avoid him in GL but is a very safe pick for SL.

He has been batting well and if batting first, he is a must pick. Unfortunately hasn’t gotten to a 50 yet but has been consistent with the bat and is a safe pick for your teams. If batting second, can try Ross or Ferguson in his place.

Leads from the front and has been batting well since the last few years for this team. Hasn’t been playing well recently and can fire this time. Hit or miss pick for your teams. Must try in GL if batting second.

If the top order fails, he is very likely to take responsibility and bats well too, just the way he did in the game before the previous unfortunate runout without even facing a delivery. Came back from an injury and scored a crucial 44 and can be a good option to try in GL teams.

GL punt pick surely. He is the skipper of the team in the absence of Wade and hasn’t fired yet but can get going any day. Risky hit or miss pick.

He is the No.1 T20I batsman and is a very consistent batsman in this format of the game. He is a safe pick for your teams.

He can be a worthy pick for GL teams. Plays a good cameo and has consistently given points in every game with the bat. Especially in the absence of Ingram, he would most likely stabilize the middle order and take responsibility.

He hasn’t been too destructive with the bat but has been consistently getting above 20 runs whenever got a chance to, and can do really well. He is a must try in GL and can even take in SL in the absence of Daniel Sams.

He is the safest choice for your teams and a must pick. He has been consistently playing well with both bat and ball and has been giving great points in every game.

Short is a good pick when it comes to this format of the game and a safe pick for your teams. He is being used as a bowler too and can end up with wickets. He is a must pick in SL but drop from GL as he’s not been able to get going consistently yet.

Worthy try for GL. Can pick a wicket but even go wicketless. We can avoid in SL though. Can even avoid from your teams due to the numerous availability of options.

He has been a consistent wicket taking bowler and has been doing well in every game. He is a safe pick for your teams but due to the numerous options available, he can be tried dropping from SL teams and be tried in GL. Note that he hasn’t gone wicketless in any game this season.

He is a good pick for your teams. He has taken a wicket in almost every game this season and is also one of the top 5 leading wicket takers in this season too.

He was an X-Factor player throughout the season and finally got a game in one of the prevuous outings and showed his worth and class with the ball in the very first game for him this season. Unfortunately was dropped to the X Factor place again. He could come into the XI in place of Cook, and could be a safe pick for your teams.

Can get an assured 25 points from him and he has picked up atleast one wicket in almost every game this season and is a consistent point giver with tha ball, and also can bat well down the order as a finisher if needed.

Worthy try for GL teams. Has been bowling well and can surely pick a wicket or two nonetheless. He can go wicketless but usually does get a wicket or two at the death overs and can be picked in GL.

He has been a consistent wicket taker and has taken full advantage of his pace as well. He is a safe choice for your teams.

He is a consistent wicket taker and safely can guarantee atleast 25 points from him nonetheless. Risky pick for SL but must try in GL.

D’Arcy Short and Daniel Sams are by far the most consistent performers in this format and are the safest choices to be kept as C/VC. Other safe choices are Alex Hales and Ben McDermott for the same. 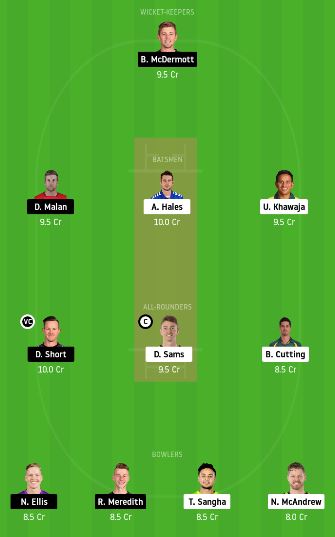 If you are like our THU vs HUR dream11 prediction. Please share this article with your friends, who are playing dream11 fantasy leagues. Don’t forget to follow us onTwitter, Telegram, and Youtube for the best dream11 tips and tricks.