Melbourne Stars vs Melbourne Renegades, The 42nd match will be played in Melbourne on 17 January 2021 at 1:45 PM.

Amongst the two options in the keeping section, he could be a much safer option as he bats in the top order and can be kept in SL. He just had one good knock and can even be avoided in SL if you want but Gotch might not even bat. Can drop in GL if Dunk plays.

He is playing like an all rounder in some matches and could bowl atleast one over and can come to bat anywhere between 3-5. He is a safe option from the batting section since there aren’t many viable options from the Stars in this section as such, but try dropping in GL.

Hit or miss player. Must try in GL. Can try dropping in Risky SL but is a good player and his aggressive approach can give good results any time soon. He had a great CPL season and has looked off colors but had a great game in his previous outing and against an ineffective unit of Renegades, he could have a go at it again.

He batted well in the previous games and can be promoted up the order if needed as well. He can be tried in GL as neither Fletcher has been able to score much nor has Cartwright been consistent with the bat as such, hence keeping the options open.

He would be leading this side. He hasn’t been able to convert starts as much as one could expect him to, and could always do well. Safe pick for your teams due to the selection percentage nonethless. He couldn’t do well as an opener and came at No.4 in the previous game and still couldn’t do much. Hit or miss pick.

Batted well to finish the game with a win two games prior and also got the team to a good score in the previous game. In an ineffective Renegades batting unit, he’s been the only person who’s been stabilizing the middle order.

He has been opening and has been giving good starts but hasn’t been able to convert them into big scores just like the other Renegades batsmen. He can be a worthy GL pick.

He is a good batsman in this format of the game and was the leading run scorer of the previous season as an opener as well. He is a safe pick for your teams.

He did amazingly well with both bat and ball in the first game that he played this season. The team scored 89 and he scored 33 and proved his worth. Must pick in GL teams. Even in the previous games he has bowled well and got a couple of scalps. He can be a safe choice in the absence of Nabi.

He was their star middle order batsman last season but had a high score of just 10 in this season until the previous game where he finally played the way in the previous season. He has been slotted to bat at No.6 and for that reason and can be avoided from SL but the way the Renegades batsmen are playing, he could be a worthy pick for GL.

In the absence of Nabi, he could be a crucial bowler for the team and can even have a go with the bat if needed. He could be a good pick in SL, but a GL pick surely.

He is a highly experienced player and one of the best spinners in this format of the game. Has been picking up wickets in this season and also does well for the Aussies. He is a safe pick, especially in the absence of the injured Coulter Nile.

A hit or miss player with the ball. Can go wicketless or even get more than 50 points. Must try in GL, can avoid in SL considering the number of options available.

Zahir Khan is a good left arm spinner and had a good game in his previous outing against the Strikers. Otherwise he’s just been wicketless so can even avoid. If bowling second, must try.

He was a great wicket taking bowler last season and has done well for Pakistan too. Hasn’t done much in the two games he’s played this season yet but is a worthy GL pick for your teams.

He is a safe choice and has done well for the Renegades over the previous years and has been in the dream team in majority of the games that they’ve played yet.

He was subbed out in one of the games in the first innings itself and didn’t bowl as a reason, but he’s a worthy pick for GL as he has looked good with the ball and can do really well. He can also be picked in SL.

He isn’t playing regularly but whenever he played, he got atleast one wicket to his name. But, unfortunately has been wicketless in the last two games that he played. If he does play, he is a good try for GL surely. A young 19 year old player and is doing well to make a name of his own too.

Marcus Stoinis, Glenn Maxwell, Adam Zampa and Shaun Marsh are safe choices and can be kept as C/VC in SL teams. 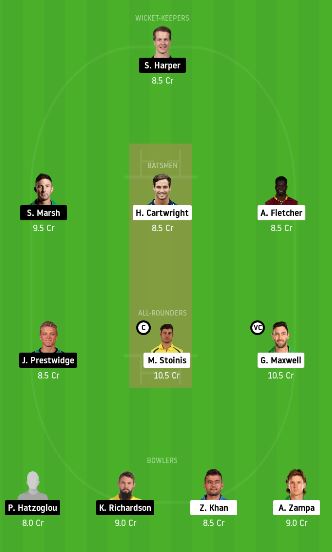 If you are like our STA vs REN dream11 prediction. Please share this article with your friends, who are playing dream11 fantasy leagues. Don’t forget to follow us onTwitter, Telegram, and Youtube for the best dream11 tips and tricks.