There’s a lot to take into consideration when you’re looking for the best SRH vs GT dream11 team. Today, We are going to discuss SRH vs GT 21st Match news, SRH vs GT fantasy Cricket prediction, and Expert data. This League is called TATA IPL 2022 in the dream11 app.

Sunrisers Hyderabad vs Gujarat Titans, The 21st match will be played in Dr DY Patil Sports Academy on 11 April 2022 at 7:30 PM.

Sun Rises Hyderabad was very poor last season and finished at bottom of points table winning only 1 game out of 9 games but this year also they started with loss in 1st two game but won 3rd game.

Gujarat Titans is new addition this year and are good side and won 1st three game they played.

N Pooran is coming back after superb international form. He will bat 2-3 down So dont miss him in your team. He failed in all games last IPL so most people will ignore him. N Pooran can be punt pick. He has scored 39 runs in last 3 games.

R Gurbaz is very good player and has been consistent for Afghanistan and his form will be crucial for GT success this tournament with bat.

W Saha is technically solid player but lack hitting power. He will bat at 1 down and also keep for his side. He missed last game.

Rahul Tripathi has been best batsman for KKR but will now play for SRH. He get start every game but not able to convert it to big score and will play 2-3 down this season. Rahul Tripathi won his team IPL last season. He has scored 83 run last 3 game.

G Phillips from NZ plays all around world in various t20 leagues. He has been in very good form. In 25 t20 international he has scored 505 runs with strike rate of 150. G Phillips did not play last game.

P Garg has not look in good form in past IPL and got out early and is treated as very inconsistent player. He did not play last game.

Shubman Gill is very good player will look to score big this IPL as seen in last 2-3 game looked compact. He scored 98 run in practice game and gave indication that he has been in good form. Shubman Gill has scored 180 run last 3 game.

G Mann has been consistent domestic performer for Punjab and has also played for India in 2 games. He can also bowl off spin whenever needed.

A Manohar from Karnataka is great hitter of bowl but has not much experience. He bat 4-5 down and can also bowl few over of spin.

S Sudharsan was top scorer for Tamilnadu in this year domestic tournament. He bat 1 down and is very consistent batsman.

D Miller is very hard hitter can destroy any bowling and has been best batsman for SA batting 3-4 down and has been very consistent, will be hungry to perform.

W Sundar will have major role to play this year, as he is expected to bat up the order and bowl full 4 overs. He has been most economical bowler since last 2 year. W Sundar has scored 58 run and picked up 4 wicket in last 3 game.

A Sharma is very attacking batsman and is coming after great domestic t20 tournament. He also bowl few over of spin. A Sharma is expected to open inning. He has scored 97 run last 3 game.

R Shepherd has been most improved bowler in last 1 year. He bowl in death also very handy finisher with bat. R Shepherd was in very good form in CPL. He has scored 32 run and picked up 3 wicket last 2 game.

M Jansen who is expected to play 5-6 down and will also bowl in death overs. He has been superb for SA with both bat and bowl. He has picked 1 wicket last game.

Hardik Pandya will act as the GT pillar. He will also lead side. He is expected to bowl full quota this season. Hardik Pandya has been very bad with the bat in worldcup but is coming back after break. He has scored 91 runs and picked up 2 wicket in last 3 game.

R Tewatia will do quick runs and everyone will wait for his batting. He also handy in taking wickets with his leg spin. He has scored 67 runs in last 3 games.

Vijay Shankar will make the middle order stronger also bowl 1-2 overs. He was in good form in practice matches and domestic t20s.

S Gopal was number 1 spinner once of RR. He has ability to pick wickets in bunch. He has been in good form in domestic circuit. S Gopal did not play last game.

Bhuvneshwar Kumar has been wicket less in most of the T20 matches last season. His credit is also high. So, can be avoided in few teams. But he was superb in IND vs WI series so try him in some gl league. He picked 2 wicket last 3 game

T Natrajan is very good at wickets taking. He is known for good variation and these ground are suiting his style of bowling. He picked 6 wicket last 3 game

U Malik is find of SRH from JK. He bowl with 150+ pace and is wicket taker. If he maintain his line and length he will be deadly for his side. U Malik picked 2 wicket last 3 game.

Rashid Khan will try to pick at least 2 wickets very good spinner. GT will depend on him so can be tried as Captain VC in Gls. He has picked 16 wickets in last 13 IPL games. He has picked 5 wicket last 3 game.

M Shami is very good at wickets taking. He is known for good variation and these ground will suit his style of bowling. He has picked 6 wicket last 3 game.

Lockie Ferguson will be main pacer for GT in this phase, He has ability to pick wickets in bunch and will also bowl in death overs. He has picked 5 wickets in last 3 game. 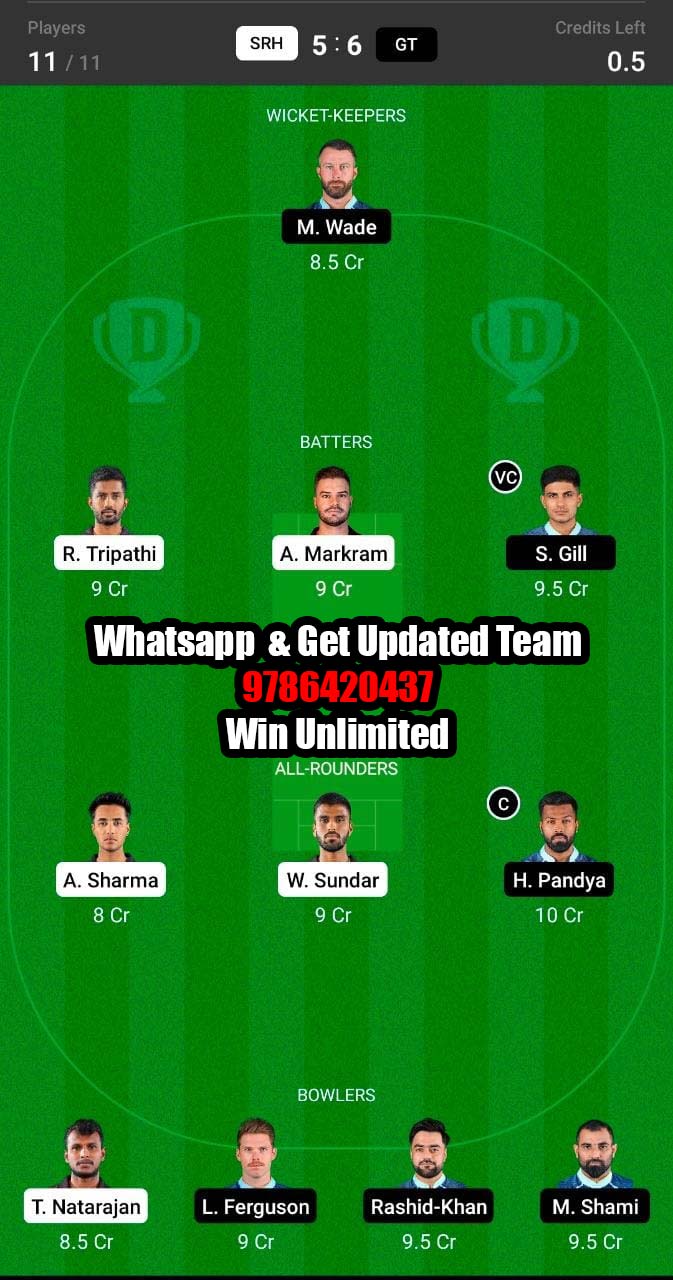