There’s a lot to take into consideration when you’re looking for the best SPT vs BZG dream11 team. Today, We are going to discuss SPT vs BZG Match news, SPT vs BZG fantasy Basketball prediction, and dream11 Expert data. This League is called Polish Basketball League in the dream11 app.

Spojnia Stargard vs Basket Zielona Gora, The match will be played in Hala Miejska on 5 February 2021 at 8:30 PM.

Somewhat they are weak at frontcourt and allowing 51.3% to the opponents. Spojnia is the worst team from defensive end and making 35.1 rebounds per game and offensively making 8.7 rebounds. They are allowing 82.5 points to the opponents. Tarrant is the top pick from this team by scoring 15.0 true points per game. He is averaging 3.2rebs and 4.6assts per game. Lundberg is the top pick from Zastal team averaging 17.3pts, 6.4assts, and 4.0rebs per game.

4. According To H2H and recent results, Zastal is performing better than Stargard. 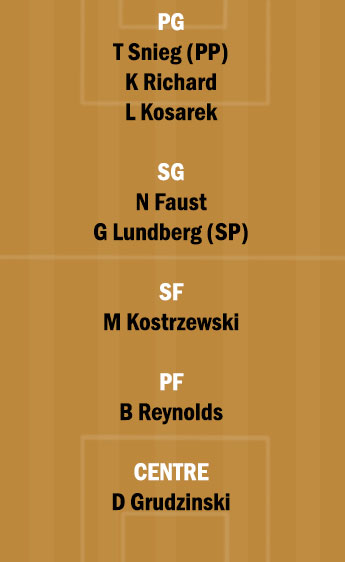