There’s a lot to take into consideration when you’re looking for the best SL vs IND dream11 team. Today, We are going to discuss SL vs IND 1st T20 Match news, SL vs IND fantasy Cricket prediction, and dream11 Expert data. This League is called India tour of Sri Lanka 2021 in the dream11 app.

India is favourite to win this series. They have come here with so many star player not available but Indias bench strength is so strong that this look like India’s very strong side. They won 1st game by 7 wickets with 14 overs left and 2nd game from the position where match was gone but D Chahar brilliance won them but lost 3rd game after giving debut to 5 players. In this format India has been very strong and will look to start on high.

Sri Lanka recent form is not great. They played last series against ENG which they lost very badly and lost 1st odi by 7 wickets and then should have won 2nd game but lost due to brilliant inning from D Chahar but won 3rd game with brilliant allround perfromance.

I Kishan was brilliant in 1st game batting 1 down scoring 59 runs but got out early 2nd game and missed last odi.
S Samson played last odi game and if plays in 1st t20 must consider him as he is very attacking player and was looking in good touch.

C Aslanka is very important player so must try them in gl teams as capable to score big. He is very consistent player in Srilankan domestic circuit. He has scored 127 runs last 3 game.

Avishka Fernado has looked best batsman from both teams. He will open and he is very attacking player and also consistent. He has scored 159 runs in last 3 game. His style of batting will suit t20s.

A Bandra or P Nisanka if plays both have been ordinary last series but there home form is great so try in gl teams.

P Shaw is very hard hitter can destroy any bowling and has been best batsman for DC in IPL , will be hunger to perform and cement his spot. He was brilliant 1st game scoring 43 of just 24 balls but got out early 2nd game then missed half century by 1 run in 3rd game.

S Dhwan is India’s best player can score big hundred opening inning and will also lead side. He has been in good form in IPL and he loves oneday format. He took his team home with brilliant 86 not out last game and got start 2nd game before getting out and got out early 3rd game. His place in t20 side is not fix so it will be golden opurtunity for him to score big and cement his place.

M Pandey if plays will bat at 2 down and is very good player and has been in Sublime form in domestic but has not justify that in International games. It will be last chance for him if get to play. He threw his wicket again 1st game after getting set but 2nd game was very unlucky to get run out after getting set and again 3rd game wasted another opurtunity.

S Yadav will bat 2 down. He has been performing consistently for Mumbai in IPL as well as in domestic circuit since last 3-4 years. He was India’s best batsman in odi series and won man of the series award.

D Shanaka can provide atleast 50+ points as he can bowl 3-4 over and also very consistent middle order batsman. He will lead side which he did previously against PAK and won that series in t20s. He score 55 run last 3 game and also pick 2 wicket.

D D Silva is must have try from this section. DD Silva also bowl few overs and was exceptional in England series but till now throwing his start. He has scored 48 run and pick 2wickets in last 3 games.

Try W Hasranga in gl teams as captain. He bats 4-5 down and bowl 4 overs. He has knack of picking wickets was brilliant 2nd last game in odi picked 3 wicket but miss last game as he was not fit.

R Mendis may debut this game as he performed well in intra squad matches and last odi.

B Rajpaksha is coming back after injury. He was brilliant in starting games of his career and look like future prospect and brilliant performance in the last game by scoring fluent 65 runs.

H Pandya has been very good allrounder in Indian cricket circuit. He is a pinch hitter and also bowl 2-3 overs. He had a very ordinary odi series according to his standards.

K Pandya will bat 5 down and bowl 7-8 overs. He looked patchy with bat in odi series but can be dangerous if get set.

I Udana, D Chameera has been picking consistant wickets for SRI both are must have try from SRI in t20s. L Sandkan and A Dananjya are mystery spinner capable of picking wickets in bunch.

B Kumar can be promoted anytime will provide points through bat and ball, is best bowler around world. He was ones India’s number 1 bowler but injury has taken him back but this series he will have additional duty of vice captainship. He was very ordinary in odi series.

N Saini, C Sakariya are very good paceman for India if get chance to play. N Saini with his height can extract lot of bounce can be lethal on his day, D Chahar will take new bowl and a swing bowler who also bat he showed full world 2nd last game with brilliant half century.

Y Chahal can handle spin department with K Yadav who looked in good touch in odis. Chahal with his leg spin can be cruicial can pick 2-3 wicket but we can expect V Chakrworthy and Rahul Chahar to play ahead of Chahal and Kuldeep because they are most consistent in t20s specially in IPL and has x factor on them. 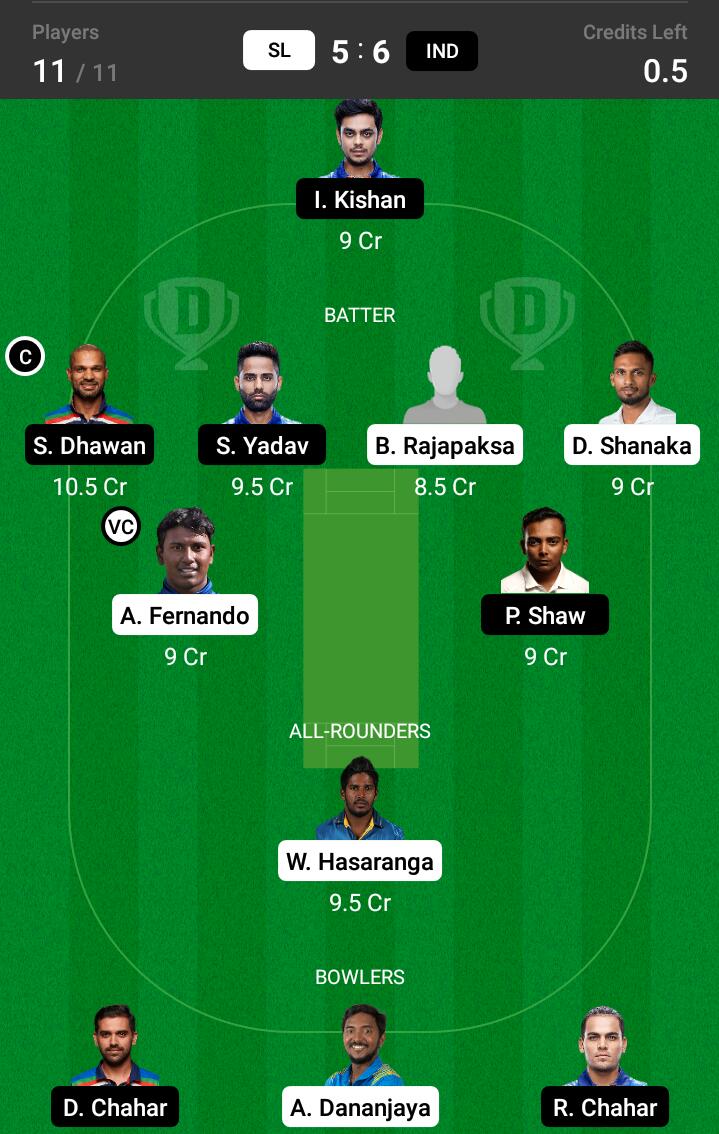