There’s a lot to take into consideration when you’re looking for the best SKB vs ORG dream11 team. Today, We are going to discuss SKB vs ORG 20th Match news, SKB vs ORG fantasy Cricket prediction, and dream11 Expert data. This League is called BYJU’S VCA T20 2021 in the dream11 app.

VCA Sky Blue vs VCA Orange, The 20th match will be played in Vidarbha Cricket Association Stadium on 14 October 2021 at 1:30 PM.

VCA Sky Blue is a very weak side. They have played 6 game winning only 2 games.

S Wath will open and is very good player, is a very skilful player, will also look to contribute some runs in the opening. He has scored 288 runs in last 6 games

Y Rathod bat in middle order for SKB but lack consistency. He has scored 29 runs in last 6 games.

K Dahiya will open for ORG. He is a powerful, very attacking player. He has scored 63 runs and picked up 1 wicket in last 5 games.

A Wankhade is batting allrounder who can bowl 2-3 overs if needed batting 2 down. He has scored 202 runs in last 6 games.

S Ragunath will open and is very good player, is a very skilful player, will also look to contribute some runs opening inning. He has scored 149 runs and picked up 4 wickets in last 6 games.

R Rathod is best batsman of SKB who bat 2 down and also has been in good form. He has scored 137 runs in last 6 games

Try N Chavan and Y Rathod in gl teams as they are good player and can score big.

A Karnewar very attacking player has good t20 record in his name also bowl. He has scored 107 runs and picked 9 wickets in last 6 games.

P Agarwal is very good wicket taking bowler who can also bat. He has scored 39 runs and picked 6 wickets in last 4 games

P Hinge and S Kapse are the opening bowler for ORG will also bowl in death so high chance of picking wickets, A Wakhare and A Chauraisa will support them, both looked promising. A Wakahare has been among top wicket taker. A Wakhare has picked 8 wickets in last 5 games.

S Neral and S Deshmukhare the opening bowler for SKB will also bowl in death so high chance of picking wickets, S Bingewar and R Jangid will support them, both has been good. 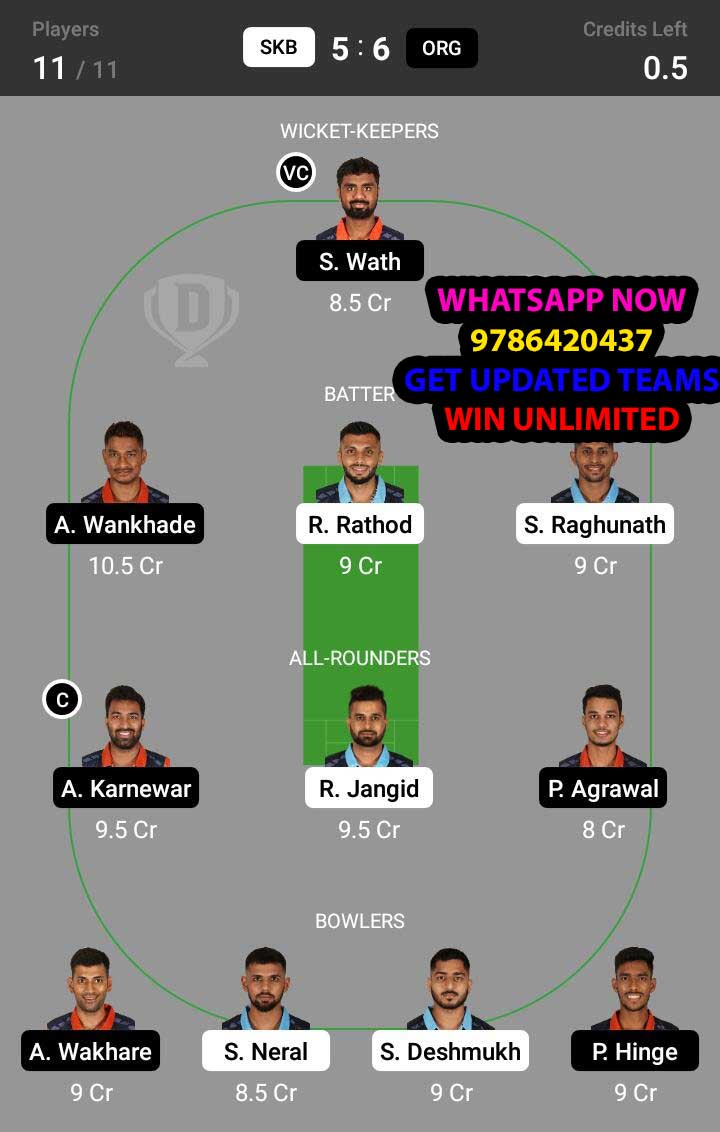