There’s a lot to take into consideration when you’re looking for the best SIN vs DHA dream11 team. Today, We are going to discuss SIN vs DHA 15th Match news, SIN vs DHA fantasy Cricket prediction, and Expert data. This League is called BYJU’S Jharkhand T20 2022 in the dream11 app.

Singhbhum Strickers vs Dhanbad Dynamos, The 15th match will be played in JSCA International Stadium Complex on 23 June 2022 at 9:00 AM.

Singhbhum Strickers are average side and has won 2 game and lost 2 game from 4 games they have played.

Dhanbad Dynamos are weak side and has lost last 3 games from 4 games they have played.

S Sagar will bat at top and is very good player, is a very skill full keeper, will also look to contribute some runs in the middle order.

V Vishal, P Munda will open the innings for DUM. V Vishal who will open the batting for his side is great hitter of bowl. He has scored 54 runs in last 4 game.

P Kumar will hold middle order and will be crucial if top order collapse. He can also bowl few overs. He has scored 35 runs last 4 game.

H Kr bat at top and is timing base player. He is little inconsistent as mostly waste his start. He has scored 82 runs in last 4 game.

Y Kumar will finish the inning, basically a bowling allrounder. He has scored 17 runs and picked up 5 wicket in last 4 game.

K Ankit is batsman who can also bowl well if needed. He has scored 13 run last 4 game.

B Krishna is very good bowler who has ability to pick wickets in bunch and also very good finisher with bat.

M Kumar is best player from SIN side and has scored 225 runs in 11 matches in his career. He has scored 80 runs in last 4 game also picking 3 wicket.

V Tiwary, Y Kumar will be the opening bowler for DHA, V Tiwary has been wicket taking bowler for them, P Ranjan, A Choudhary will assist them and known for picking wickets. P Ranjan has picked up 6 wickets in last 4 games.

B Krishna and S Kr are 2 wicket taking bowler for SIN. Both are consistent with wickets. M Kumar and R Chauhan will assist them. 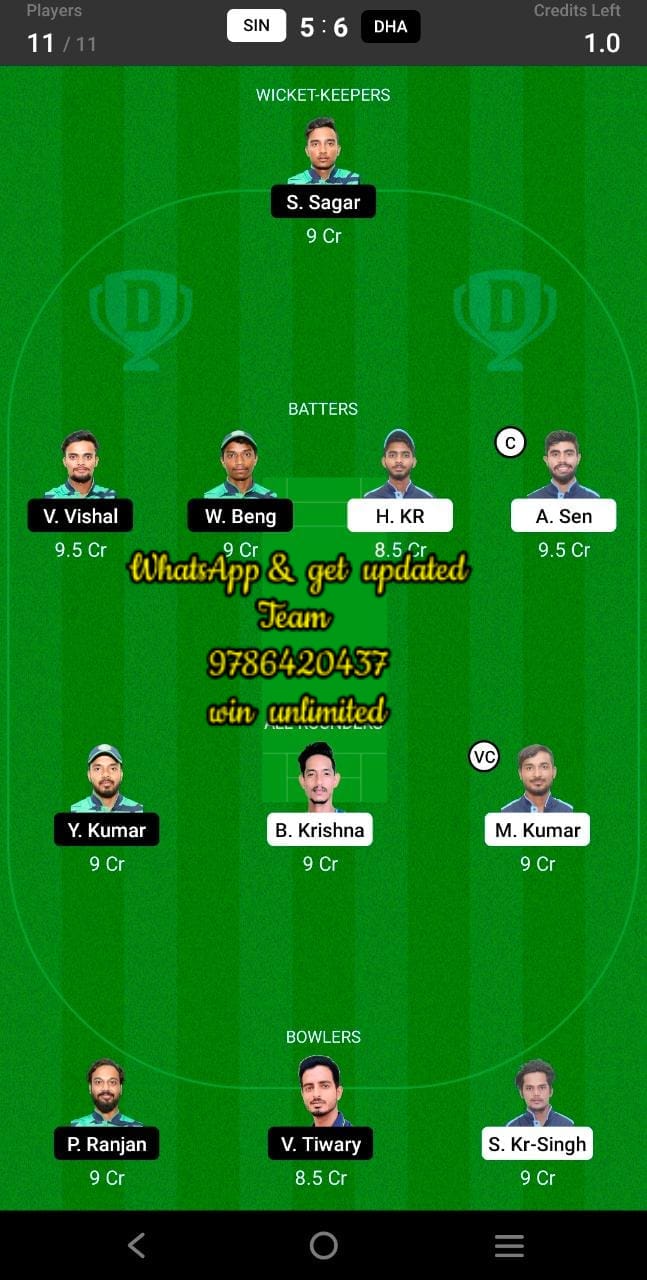