There’s a lot to take into consideration when you’re looking for the best SGH vs KHTC dream11 team. Today, We are going to discuss SGH vs KHTC 18th Match news, SGH vs KHTC fantasy Cricket prediction, and dream11 Expert data. This League is called Fancode ECS T10 Kiel 2021 in the dream11 app.

SG Hameln is an average side. They won last game against MTSV by 7 runs. They have played 5 game won 3 game while loosing 2 game.

C Pagadapoola is very cruicial player from KHTC. He has scored 145 runs in 6 game.

A Rajapakshe is must in your teams, as He will open. He scored 95 run 1st 5 game.

S Rahman and S Shinwari are must have from this section.

S Rahman will open inning and bowl 2 overs so must try player as captain vc. He has scored 39 runs and picked 4 wickets in 5 games.

S Shinwari has scored 91 runs in 6 games but has good record. He has not bowl in last 2 game but can bowl few over if require.

N Mulakhil and S Saoji are must have try for gl. S Saoji bowl 1-2 overs in few games so try him in some gl teams while N Mulakhil bats 2-3 down.

R Babar is must have from this department, will bowl 2 overs can pick 1-2 wickets. He has picked 5 wicket in 5 games. He is batting 2 down and has scored 51 runs.

R Barakzai also must have player from this section will bat in top3 and will also bowl 2 overs, He has scored 31 runs and picked 4 wickets in 5 games.

A Azam also must have from this department, will bowl 2 overs can pick 1-2 wickets. He has picked 6 wicket in 6 games but can also sent as hitter in top order.

M Chaminda is must have from this department, will bowl 2 overs can pick 1-2 wickets. He has picked 5 wicket in 6 games. He bats in top order and has scored 38 runs.

A Safdar and A Latif are wicket taking bowler so dont ignore them. A Safdar has picked 5 wicket in 6 games till now. 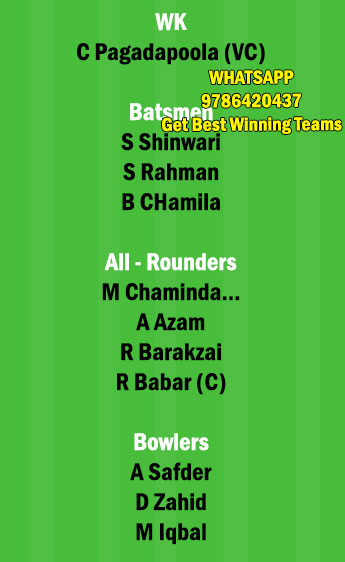