There’s a lot to take into consideration when you’re looking for the best SES vs SUN dream11 team. Today, We are going to discuss SES vs SUN 1st Match news, SES vs SUN fantasy Cricket prediction, and Expert data. This League is called English Women’s One-Day Trophy 2022 in the dream11 app.

South East Stars has been good in odd and keep that momentum in t20s.

Sunrisers has been weak side and has lost last few games they have played.

K Chathli is ordinary player but will provide keeping points. She has scored 40 runs in last 2 game.

A Carr is wicket keeper have been consistent in domestic circuit and bat 1 down. She scored just 24 runs in 3 games in odd. She has scored 54 runs in last 3 t20s.

S Dunkley will bat 1 down and is coming to this series with brilliant hundred form. If she plays She is very good captain choice for gl if plays but there is less chance as with National team.

A Cranstone will bat 3 down she is hit or miss type. She has scored 74 runs in last 2 game.

P Franklin has been in good form scoring 37 runs and picked 2 wickets in last 2 games. She did not play last game.

B Smith is must have player provide points through both department score 59 last game and also pick 3 wickets recent odd. She has scored 53 runs with bat and picked 3 wickets in last 2 t20s.

A Davidson is there best player she is best allrounder of side must have player from this side. She has scored 18 runs and picked up 2 wickets in last 2 game.

A Capsey will bat 2 down and bowl 3-4 overs. She has 141 runs in 6 games also picking 2 wicket before this series. She was brilliant in hundred with both bat and bowl.

G Scrivens will bat 5 down is a very good allrounder from the side capable to score big also has ability of picking wickets. She scored 56 runs in last 3 odd game and also picking 2 wicket. She scored 100 run in last 3 t20 and picked 5 wicket.

J Gardner will bat at 2 down and is very good player will provide points through both department. She has scored 50 runs and picked up 4 wickets in last 3 t20s.

M Villiars has good past record very capable bowler also play for national side. She has scored 31 runs batting 4 down and picking 1 wickets and in last 2 t20s.

K Moore and F Davies has good past record very capable bowler for SES. T Farrant was highest wicket taker in Hundred and is in very good form. D Gregory will supoort them with 2-3 overs.

K Castle is wicket taking leg spinner and must have player. She has picked 3 wickets in last 3 games.

Vice-Captain Choice: A Cranstone, A Davidson 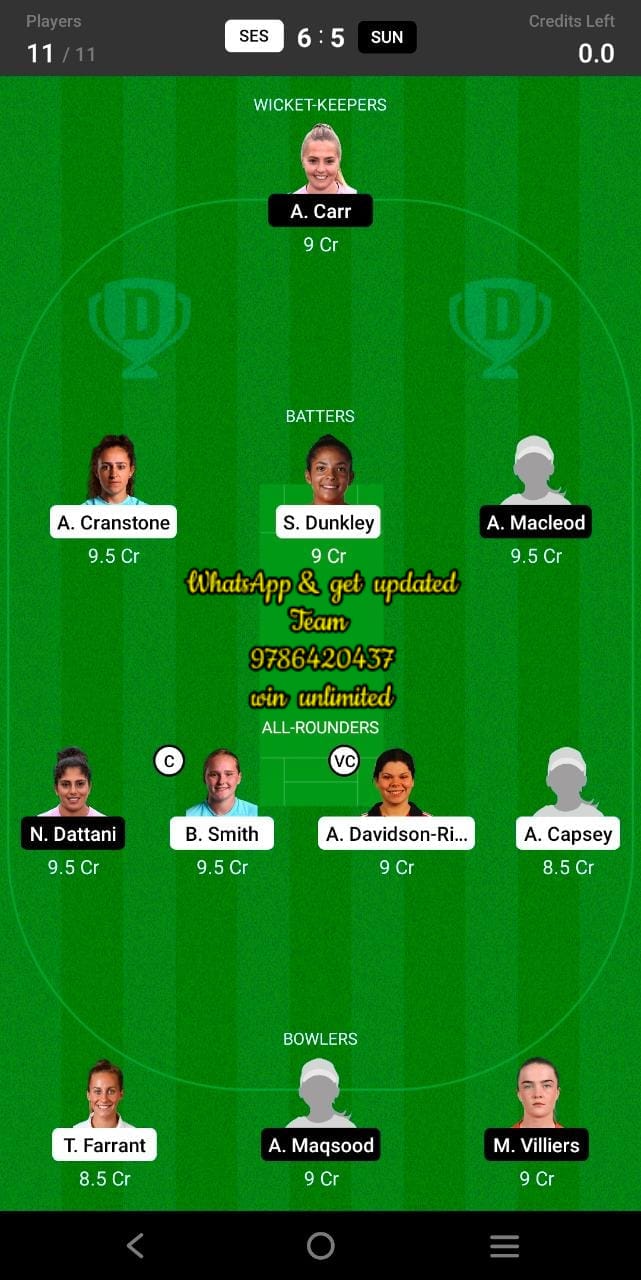