There’s a lot to take into consideration when you’re looking for the best SCC vs DOHS dream11 team. Today, We are going to discuss SCC vs DOHS 28th Match news, SCC vs DOHS fantasy Cricket prediction, and dream11 Expert data. This League is called Dhaka T20 2021 in the dream11 app.

Shinepukur Cricket Club vs Old DOHS Sports Club, The 28th match will be played in Bangladesh Krira Shikkha Protisthan No 3 Ground, Savar on 11 June 2021 at 8:30 AM.

Shinepukur Cricket Club is very inconsistent side has won 1 game while losing 1.

Old DOHS Sports Club consist of players performing consistently in domestic and will look to show there talent. They lost last game against BU by 2 runs and has won 1 game and lost 2.

M Islam will bat 2 down for SCC. He is consistent with bat in domestic circuit. He is talented player capable of scoring big and is very close of national call.

Try P Kumar in gl teams only he has not played much higher level cricket and bats too low.

A Islam has been consistently performing all games has scored 117 runs in 3 games and picked 1 wicket.

R Ahmad has scored 118 runs in 1st 3 game but could not convert his start.

M Hasan Joy is future of BAN but has failed to convert his start in all games.

T Hasan and S Hossain will open for SCC. Both are very good youngster. SCC performance will depend on them. T Hasan has scored 55 runs in 2 games.

T Hirdoy will bowl 2-3 over of spin and will also bat 2 down for his side. He is very consistant batsman. He has scored 57 runs in 3 game.

R Hasan is must have from this department, will bowl 3-4 overs in middle and death can pick 1-2 wickets. He is very good leg spinner. R Hasan has picked 4 wicket in 3 games.

A Islam has good domestic record and took 2 wicket last game so try him in gl teams.

T Islam is left arm orthodox spinner and has been best bowler in both games picking 6 wickets.

H Murad bowls in death and has picked 3 wickets in 2 games. 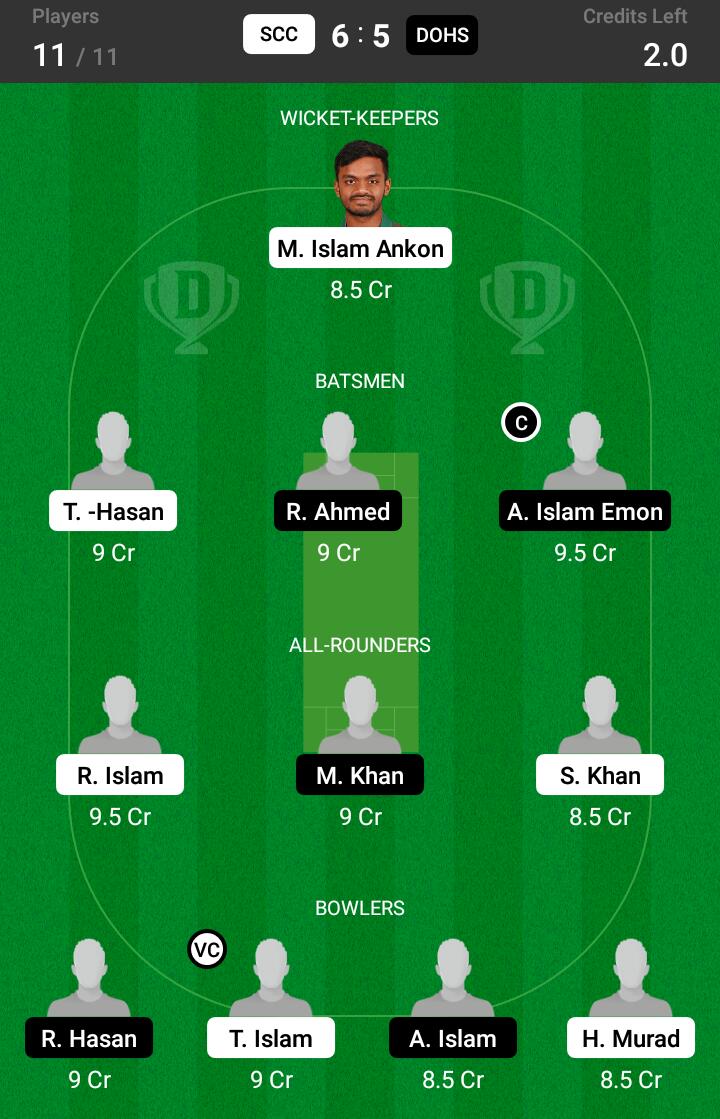