There’s a lot to take into consideration when you’re looking for the best SA-W vs SL-W dream11 team. Today, We are going to discuss SA-W vs SL-W 11th Match news, SA-W vs SL-W fantasy Cricket prediction, and Expert data. This League is called Women’s T20 Commonwealth Games in the dream11 app.

South Africa Women vs Sri Lanka Women, The 11th match will be played in Edgbaston, Birmingham on 4 August 2022 at 3:30 PM.

South Africa Women and Sri Lanka Women both are out of the tournament. They lost two by two matches played so far. Both team will look to grap today’s game.

Tazmin Brits will open the innings for SA-W’s team. She is not a power hitter. Last game Brits managed to get 38 runs from 37 balls.

Anushka Sanjeewani will bat at 6th Position. She mostly score dream11 points from catch and stumping.

Sinalo Jafta will keep the gloves. She is lower order batsmen.

Laura Wolvaardt will bat at one down. She always looks to score runs. Wolvaardt Scored 69 runs from two matches with an average of 30+. In last 10 matches she scored four half-centuries.

Nilakshi de Silva is one of the consistent batsmen for SL-W’s team. She will bat at 3rd down. She scored 25 and 36 in this tournament so far.

Sune Luus, The skipper is not impressive in this tournament. She will come to bat at 4th down. She is a good wicket-taker but she hasn’t bowled single over in both matches.

Hasini Perera is a one down batsmen. She is a good pick for dream11 grand league team as Vice-Captain choice. She is a hit or miss type.

Mignon du Preez will bat at 3rd down. She is a hard hitter but not in form now. you can try her in GL teams.

V Rajapaksha will open the innings. She is not in good form. So try her in SA-W vs SL-W GL teams.

Chloe Tryon will grab dream11 points from both bat and bowl. She averagely try to score 15+ runs in 2nd down. And also she will bowl 3 to 4 overs. Tryon is a must pick player for small league teams.

Anneke Bosch will open the innings. She is also a must pick. We can get points from both sections. She mostly bowl in between from 8th to 15th overs.

Chamari Athapaththu will open the innings. She is is one of the finest all-rounders in Women’s cricket at the moment. we can expect big innings from her in this match. 90% of the small league players will keep her as Captain choice.

Kavisha Dilhari is a middle order batsmen. She rarely scores. So we can’t expect dream11 points from batting section. She will bowl 3 overs. So we can expect 1 wicket from her.

Nadine de Klerk was expensive in the last match and wicketless. So try in SA-W vs SL-W grand league teams.

Inoka Ranaweera and Oshadi Ranasinghe are in great form. Both are death over bowlers. They taking wickets consistently. So both are must pick for your SA-W vs SL-W dream11 team.

Shabnim Ismail will bowl first two over in starting of the game and remaining overs will be bowled at end of the game. SL-W opening batting order is not much strong. So, we can expect earlier wickets.

Nonkululeko Mlaba consistently getting wickets. She has very good record in T20 games. So don’t miss her.

Ayabonga Khaka selection rate is very low in today match. Make note of this, Khaka is death over bowler. So high chance of getting wickets. If you play 4 members contest, then we recommend her very strongly.

Ama Kanchana and Sugandika Kumari not good in wicket taking. Both will take one wicket or looks wicketless in most of the matches. 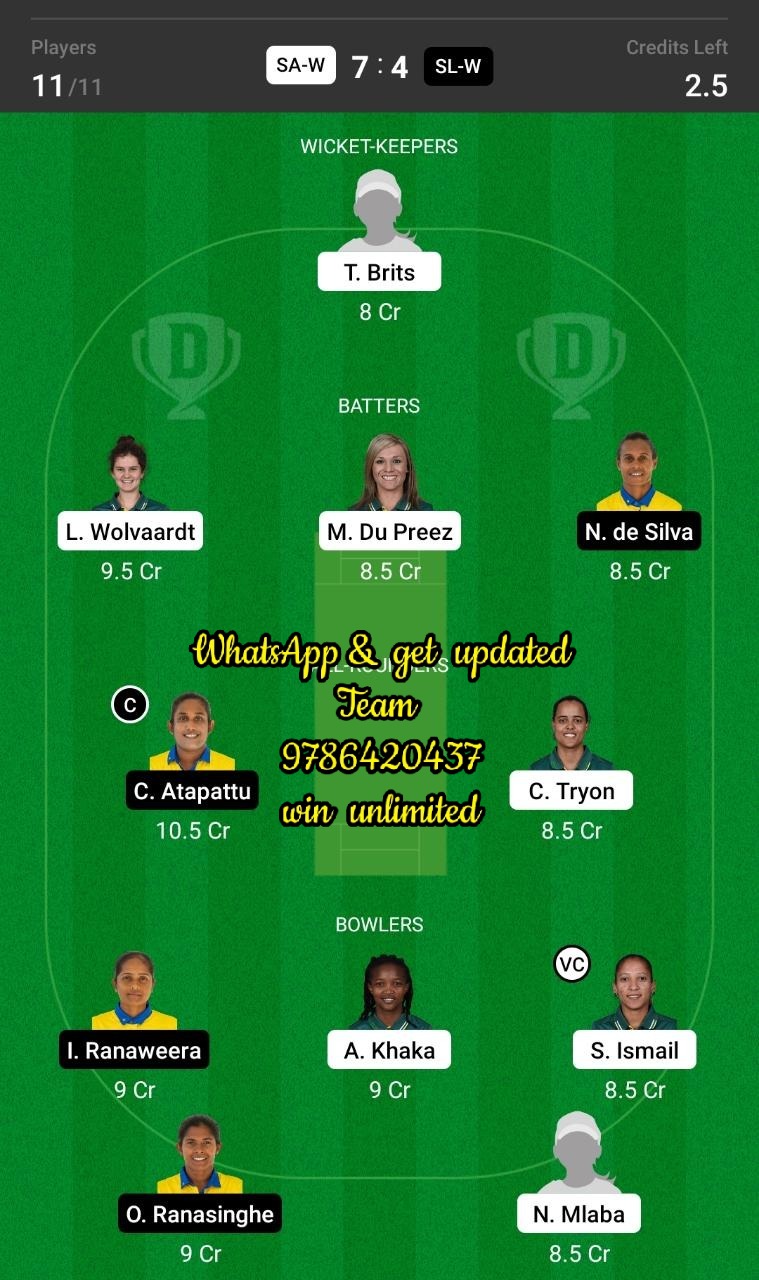