There’s a lot to take into consideration when you’re looking for the best RR vs LKN dream11 team. Today, We are going to discuss RR vs LKN 20th Match news, RR vs LKN fantasy Cricket prediction, and Expert data. This League is called TATA IPL 2022 in the dream11 app.

Lucknow is new addition this year and are good side they lost 1st game they played but won 2nd 3rd and 4th game.

Rajasthan Royals has been good side but could not finish in top 4 in last few season but this year they are very good side and won 1st two game very easily but lost 3rd game.

Lokesh Rahul is LSG best player has been in brilliant form in last 2 year has scored 5 50+ score in his last 8 ipl matches also doing keeping for side. He will surely add dream11 points from both units. So, don’t miss him. He has scored 489 runs in last 11 IPL games. He has scored 132 run last 4 game.

De Cock has been phenomenal for MI opening inning and will look to show same form for LSG. He will also keep. De Cock has scored 297 runs in last 11 IPL games. He has scored 149 run last 4 game.

Jos Butler open and will strengthen them at top must have player very consistent can also keep. He has been best RR player. He has scored 205 run last 3 game.

E Lewis is very consistent cricketer expected to bat 1 down and is very attacking batsmen. He is very good at hitting sixes. He has scored 71 run last 4 game.

Manish Pandey was dropped from SRH in last IPL due to inconsistent form but is coming back after brilliant domestic form. He has scored 223 runs in 7 IPL games. He has scored 22 runs in last 3 game.

Deepak Hooda is technically very strong and is expected to bat 3 down and can also bowl few over of off spin. He has scored 234 runs in 9 games and is in very good form. He has scored 130 run and picked up 1 wicket last 4 game.

Y Jaiswal was retained by RR and will open. He looked good in last few games in last IPL but will look to be consistent this year. He has scored 25 run last 3 game.

Devdutt Padikkal has been in good form has already scored hundred in IPL and has good average so far and has been performing every game but use to play for RCB. He has scored 85 run last 3 game.

J Holder who is expected to play 4-5 down and will also bowl in death overs. He has been superb for SRH in previous years with both bat and bowl. He has scored 8 run and picked up 3 wicket last 2 game.

M Stoinis expected to finish inning for LSG and will bowl 2-3 over every match, He is coming with great international form. He has been picking wickets in middle order. He will miss few games.

Krunal Pandya will finish inning for LSG, can also be sent as a pinch hitter, He is expected to bowl much now. He has scored 80 run and picked up 3 wicket last 4 game.

K Gowtham will have major role to play this year, as he is expected to bat up the order and bowl 2-3 overs of off spin. He has been most economical bowler in domestic circuit.

Ayush Badoni youngster from Delhi who play as a finisher and can also few over of spin and has impressed everyone . He has scored 102 run last 4 game.

R Bishnoi leg spinner new recruit for LSG and is wicket taking and has been in very good form. R Bishoni has taken 4 wickets in last 4 games.

D Chameera and A Tye both are wicket taking bowler for LSG, but can also go for runs in death overs. He picked 2 wickets in last 2 games.

A Rajpoot has experience of IPL but has not played since last 2 years. He has been in very good form for UP in domestic circuit. He did not play last game.

Avesh Khan will be main pacer for LSG in this phase, He has ability to pick wickets in bunch and will also bowl in death overs. He has picked 23 wickets in last 15 IPL game. He picked 7 wickets in last 4 game.

Y Chahal will take maximum wickets for RR. He has been pick of the bowler in IPL. Y Chahal also bowl in power plays and middle over so batsman can target him and can loose wicket. He has picked 17 wickets in last 13 IPL games. Y Chahal has picked 7 wicket last 3 game.

P Krishna domestic records are good. But they needs to improve more in IPL matches but is coming with brilliant international form.. P Krishna bowl with raw pace and will bowl in death overs. He has picked 3 wicket last 3 game. 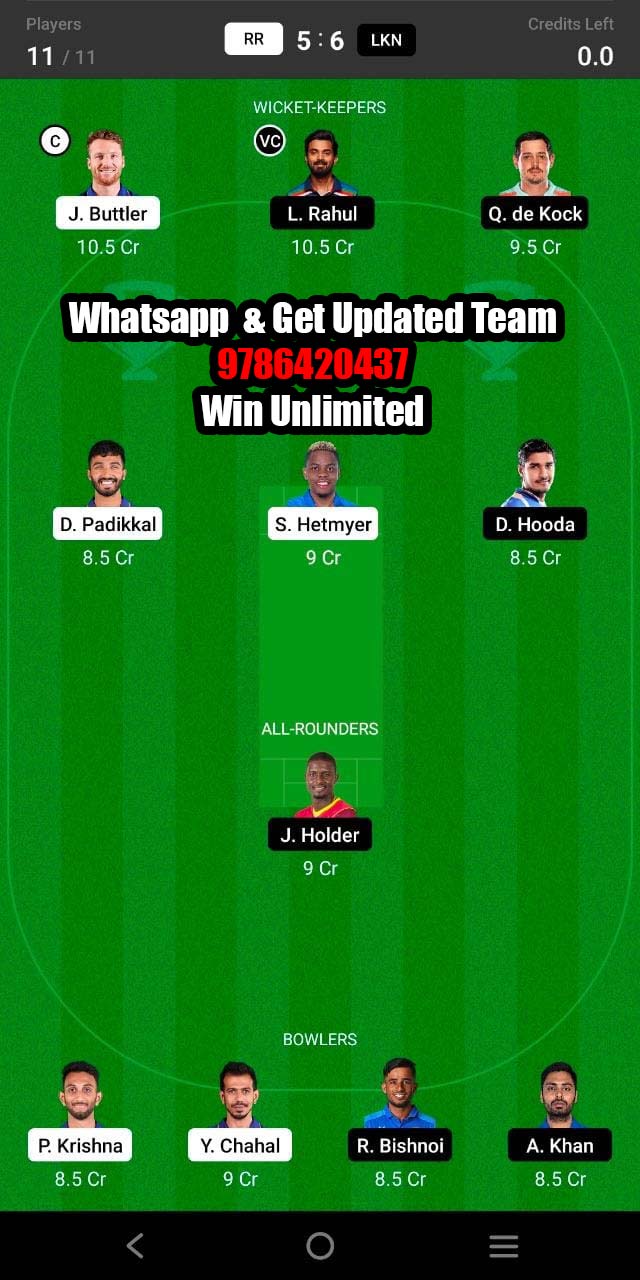