There’s a lot to take into consideration when you’re looking for the best RNC vs SBH dream11 team. Today, We are going to discuss RNC vs SBH 17th Match news, RNC vs SBH fantasy Cricket prediction, and dream11 Expert data. This League is called Tanzania T10 League 2021 in the dream11 app.

Rhino Challengers won the last game against TRG by 8 wickets. They have won 2 games while loosing 1 game.

A Jabiri will open or bat 2 down. He has good domestic records.

Try N Zahoro in your gl team, He will mostly will bat 4-5 down.

I Ismail, A Jasani must have from this section. Both are openers.

A Jasani has scored 120 runs in 4 games and has been consistent.

For other batsman N Potachira, M Salim can be tried these are average player. N Potachira scored 33 and 11 runs in last 2 games.

J Darji will open and bowl 2 over so good captain vc choice. J Darji has picked 5 wickets and scored 84 runs in 4 games.

S Bom will bat 1 down and bowl 2 over so good captain vc choice. He has scored 101 runs and picked 3 wickets.

V Patel is cruicial from RNC side as he is opening and bowling 2 overs. He has picked 5 wickets in 3 game and scored 25 runs.

R Alluri and A Kakonji is cruicial from SBH side as they are batting 3-4 down and can bowl 2 overs. R Alluri has been highest wicket taker with 6 wickets in 4 games.

V Abrahim is must have from this department, will bowl 2 overs in middle can pick 1-2 wickets. He has picked 3 wicket in 4 games.

Try A Akida in your teams. He will be opening bowler for side. He picked up 1 wicket by giving 19 runs in 2 over last game.

H Chouhan will open inning and bowl 2 overs. He is good choice for captain vice captain. 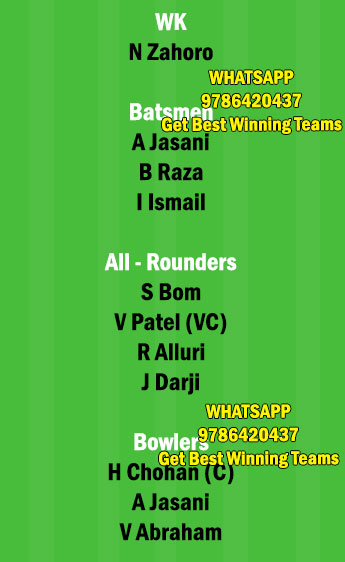