There’s a lot to take into consideration when you’re looking for the best POR vs NED XI dream11 team. Today, We are going to discuss POR vs NED XI 16th Match news, POR vs NED XI fantasy Cricket prediction, and dream11 Expert data. This League is called Dream11 ECC T10 2021 in the dream11 app.

Portland are very good side has won 4 games from 5 games they have played.

Netherlands XI are also very good side and has won all 6 games they have played.

A Zulfiqar will bat 3-4 down and is very consistent player. He also keep for his side. He has scored 42 runs in last 5 game.

F Stoman will bat 6=7 down and is ordinary batsman. He also keep for his side.

A Zaib is very important player from POR as he bat 1 down and also bowl 1-2 0vers. He has scored 105 runs and pickd up 6 wickets in last 5 game.

M Ahmad is very good player given in batting section will open. He was brilliant last game. He has scored 139 runs and picked up 2 wickets in last 4 games.

B Gorle is hit or miss type player but can score quick run if get set so must try in gl teams as captain.

A Andani is very good player will open or bat 2-3 down and can also bowl 2 overs but has not bowl yet.

C Floyd is proper allrounder who bats 1-2 down also has ability to pick wickets. He has scored 178 runs and picked 7 wickets in last 5 game.

N Shehzad is best allrounder from POR so keep an eye on him. He has scored 54 runs and picked 6 wickets in last 4 games.

S Braat is wicket taking bowler and take wickets in bunch. He is also very attacking batsman and bat 3 down.

I Khan is proper bowler who bats 1 down also has ability to pick wickets. He has scored 24 runs and picked 6 wickets in last 5 games.

J De will bowl in middle phase and get wickets as player might go after him. He has picked 10 wicket in last 5 games.

J Khan will bat 3-4 down and bowl 2 over. He has ability to hit big sixes and also capable bowler. He has scored 22 run and picked up 7 wicket in last 5 games.

Try R Klein in gl teams as he has good domestic record.

Vice-Captain Choice: A Zaib, I Khan 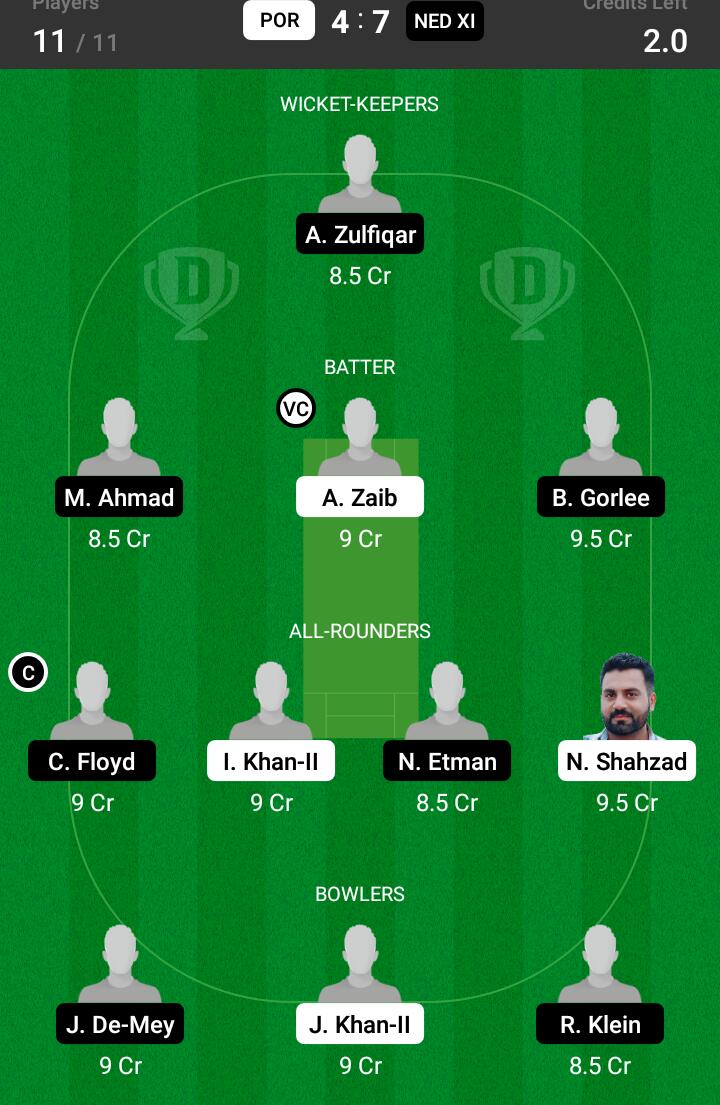