There’s a lot to take into consideration when you’re looking for the best PHX vs DEN dream11 team. Today, We are going to discuss PHX vs DEN Match news, PHX vs DEN fantasy Basketball prediction, and dream11 Expert data. This League is called NBA 2020-21 in the dream11 app.

Phoenix Suns vs Denver Nuggets, The match will be played in Talking Stick Resort Arena on 24 January 2021 at 7:30 AM.

Jokic scored 66 fantasy points in the last game against the Suns and against the Ayton. The matchup is quite favorable for Jokic and he can easily post a double-double and even a triple-double. He is my first pick for this slate.. The next one is Murray as he is posting a big against the Chris Paul and defending the Paul quite good. Porter Jr back to the team and this leads to Millsap and Barton usage rates to be reduced.

Booker leads the Suns team with 29.5 usage rate and scored well against Harris in the last game. Ayton is my top pick from this team and Paul is behind him. We can see a low scoring game.

According To Recent and h2h match stats, Nuggets are performing well and are slightly dominating in all aspects in this seasons so far. Offensively And Defensively, Nuggets are strong and dominating in opposing the backcourt points to the opponents. So It’s Better To select the best more from Nuggets into your roster.

5. According to H2H and recent results, both the teams have slow pace. 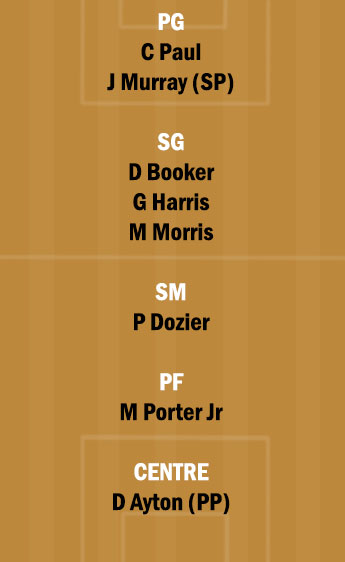