There’s a lot to take into consideration when you’re looking for the best PCK vs PSV dream11 team. Today, We are going to discuss PCK vs PSV 45th Match news, PCK vs PSV fantasy Cricket prediction, and dream11 Expert data. This League is called Fancode ECS T10 Prague 2021 in the dream11 app.

Prague CC Kings vs Prague Spartans Vanguards, The 45th match will be played in Vinor Cricket Ground on 15 May 2021 at 12:30 PM.

Prague CC Kings won last game against BRD by 7 wickets. They have won 4 game and are very strong side.

Prague Spartans Vanguards won last game against UCC by 34 runs, they have won4 lost 2 while 1 game got tied.

H Ahmad will open has scored 26 runs in 6 game. He is much experienced and better player.

S Bhatia mostly bat 1 down and is very good player but his position not fix. He has scored 54 run in 6 game.

K Venkatswamy, A Ashokan must have from this section.

A Ashokan has scored 187 runs in 6 games and pick 1 wicket and has good record. He also keep in some matches.

K Venkatswamy is batting 1 down and looked best batsman form PSV side scoring 166 runs in 6 game.

For other batsman P Sadasivan, S Udugala can be tried these are good player.

K Mehta will bat 4 down and bowl 2 over . He has picked 4 wicket and bowled 2 overs all games also scoring 6 runs.

S Sengupta will open and bowl 2 over so good captain vc choice. He has scored 131 runs and picked 7 wicket in 6 games.

N Tyagi is cruicial from PSV side as he bat in top 4 and bowling 2 overs. He has scored 75 runs and pick 5 wickets in 5 games.

A Bhuiyan will probably bat 3 down and bowl 2 overs. He has picked 5 wicket and score 24 run in 4 games.

A Bhuiyan, K Mehta can bat 3-4 down and both can also bowl 1-2 overs. They are less selected can be tried. K Mehta bowl for his national side has not pick much wicket this series yet.

A Hassan is must have from PCK will bowl 2 overs in middle can pick 1-2 wickets. He has picked 6 wicket in 6 games.

F Abdullah has been pick of bolwer for PSV picking 3 wickets in 6 game.

S Ravi, L Selvan are other tryable bowler in gl teams. Both were among top wicket taker last season. 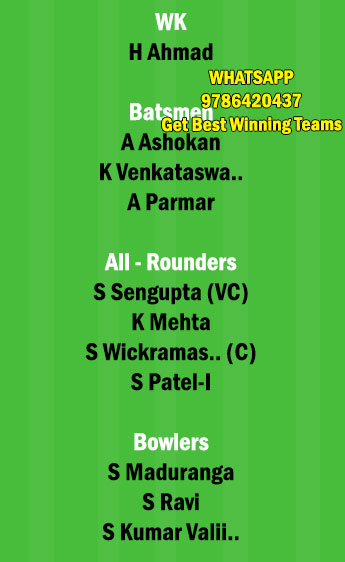