There’s a lot to take into consideration when you’re looking for the best PBKS vs SRH dream11 team. Today, We are going to discuss PBKS vs SRH 14th Match news, PBKS vs SRH fantasy Cricket prediction, and dream11 Expert data. This League is called Indian Premier League 2021 in the dream11 app.

Punjab Kings vs Sunrisers Hyderabad, The 14th match will be played in MA Chidambaram Stadium, Chennai on 21 April 2021 at 3:30 PM.

Punjab Kings batted superbly in 1st game scoring 220 but 2nd game there batting totally failed and again in 3rd game they lost due to low score. They are hit or miss type team.

Sunrisers Hyderabad is very strong side and were considered contender to win trophy. But they have lost 3 games now and there batting looking very weak .

N Pooran is coming back after superb form. He is expected to bat 3 down was last year there best player. So dont miss him in your team. Got duck 1st game and also failed 2nd and 3rd game so most people will ignore him.

J Bairstow is coming back after superb India series. He is opening now which is his ideal position and has been consistant scored brilliant half century in 1st game. So dont miss him in your team.

W Saha if plays will open and will also keep. He Got out early both game but looked in good touch in Practice matches.

David Warner is in very good form got out early 1st game but scored good half century 2nd game. He will try to hit more fours. So, his thunder shots will bring quick runs. He also plays a very crucial role in fielding.

Kane Williamson is very consistent with the bat. He can stand for a long time. He might miss few games as he is recovering from injury.

Manish Pandey is technically very strong. Most of them will not keep him. If you want to take a risk in SRH vs PBKS small league means to take him. He was highest scorer for them in 1st two game but his SR is big problem.

Arshdeep Singh, K Ahmad will strengthen the bowling unit. A Singh was exceptional in both matches bowl with good variation and raw pace.

J Richardson, R Meredith both got rewarded after superb Big Bash. Both bowled well last game. Both will also bowl in death.

Bhuvneshwar Kumar has been wicketless in most of the T20 matches last season and 1st match also. His credit is also high. So, can be avoided in few teams. But he was superb in IND vs ENG series so dont drop him in small league.

T Natrajan is very good at wickets taking. He is known for good variation and these ground are suiting his style of bowling. 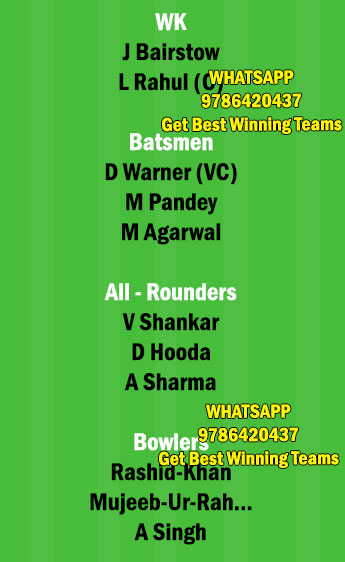