There’s a lot to take into consideration when you’re looking for the best PBKS vs MI dream11 team. Today, We are going to discuss PBKS vs MI 17th Match news, PBKS vs MI fantasy Cricket prediction, and dream11 Expert data. This League is called Indian Premier League 2021 in the dream11 app.

Punjab Kings vs Mumbai Indians, The 17th match will be played in MA Chidambaram Stadium, Chennai on 23 April 2021 at 7:30 PM.

Punjab Kings batted superbly in 1st game scoring 220 but 2nd game there batting totaly failed and again in 3rd and 4th game they lost due to low score. They are hit or miss type team.

Mumbai Indians is a very strong side and are contender to win trophy and make hat-trick of trophies they are that great side. They lost 1st game against RCB, they have never won 1st game in IPL history. Won 2nd game from the point when games was gone from there hands but lost last game and there batting failing this year.

Ishan Kishan has been in rock solid form scored 56 on his debut for India in t20. He scored 28 in 1st game look compact but got out early 2nd game but looked good last game.

De Cock came back after quarantine so look rusty will look to play big this game as getting starts every game. He will also keep.

Suryakumar Yadav is very consistent. He is also technically very solid. He will look for very good season so that he can cement his place in National side for t20 worldcup. SuryaKumar scored 31 of 23 bowl in 1st game and missed golden oppurtunity to score big in both games.

Rohit Sharma has a T20 average of 32.17. If the game is set means, We can expect a century from him. He got runout 1st game was looking in good touch and also missed to score big in 2nd and 3rd game after getting start.

Hardik Pandya will act as the MI pillar. He will do his best in both batting and bowling. Don’t miss him in DC vs MI Dream11 Team. He is expected to bowl in this game or next game.

Kieron Pollard will get less chance to bat. So, we can skip him, also rare chance of bowl.

Krunal Pandya will finish inning for MI, can also be sent as a pintch hitter, He is expected to bowl much this year as MI will pla its starting matches in Chennai where spinner play major part.

Arshdeep Singh, M Shami will strengthen the bowling unit. A Singh was exceptional in both matches bowl with good variation and raw pace.

C Jordan has been wicketless in most of the T20 matches last season he did not play 1st two game.
If he play His credit is also high. So, can be avoided in few teams. But he was superb in IND vs ENG series so dont drop him in small league.

J Richardson, R Meredith both got rewarded after superb Big Bash. Both bowled well in patches. Both also bowl in death. They did not play last game and are expected to miss this game also.

Rahul Chahar has been best spinner for MI in Mumbai grounds which mostly doesn’t favour spinner, so he will love these grounds. Must have in your team. He got 4wicket 2nd last game and getting wicket every game. 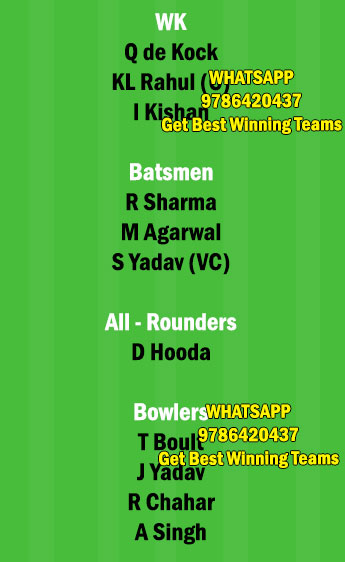