There’s a lot to take into consideration when you’re looking for the best PBKS vs KOL dream11 team. Today, We are going to discuss PBKS vs KOL 21st Match news, PBKS vs KOL fantasy Cricket prediction, and dream11 Expert data. This League is called Indian Premier League 2021 in the dream11 app.

Punjab Kings vs Kolkata Knight Riders, The 21st match will be played in Narendra Modi Stadium, Ahmedabad on 26 April 2021 at 7:30 PM.

Punjab Kings batted superbly in 1st game scoring 220 but 2nd game there batting totaly failed and again in 3rd and 4th game they lost due to low score but won 5th game by 9 wickets.They are hit or miss type team.

Dinesh Karthik will finish inning. He will try to hit every ball as he is playing as a finisher. He will also provide keeping points. He looked in good form last game.

In the last season, Shubman Gill averaged 47 as opening order batsmen. He is very good at finding gaps and hitting sixes. He has Failed in all game but very good player will look to score big this game.

Eoin Morgan will get less batting chance. Because KKR will bring Russell at any position. His form is also not good.

Nitish Rana is opening and can also bowl few overs. He has been consistant performer for them. He was best player for KKR in 1st two game but after that not done anything.

Andre Russell will do quick runs and everyone will wait for his batting. He also handy in taking wickets. He failed 1st game but got 5 wicket 2nd game. He looked dangerous in last 2 games.

Shakib Al Hasan or S Naraine will handle both the bowling and batting unit, don’t miss him. He has ability to take single handly his team home.

Arshdeep Singh, M Shami will strengthen the bowling unit. A Singh was exceptional in both matches bowl with good variation and raw pace.

J Richardson, R Meredith both got rewarded after superb Big Bash. Both bowled well in patches. Both also bowl in death. Both did not play last game and are expected to miss this game also.

V Chakrworthy and will take maximum wickets. They are also handy batsman down the order.

Pat Cummins and V Chakrwarthy will strengthen the bowling unit. Prasidh Krishna was exceptional in Eng series bowl with raw pace must have from KKR bowling unit. 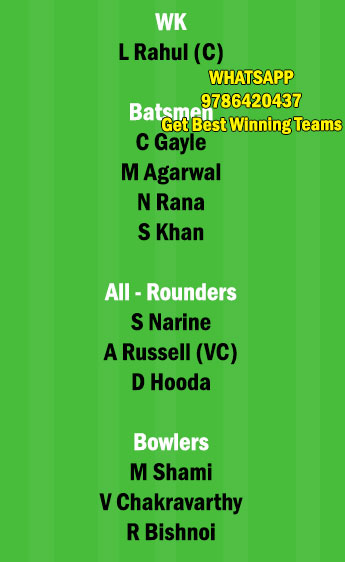