There’s a lot to take into consideration when you’re looking for the best NOT vs HAM dream11 team. Today, We are going to discuss NOT vs HAM Quater Final Match news, NOT vs HAM fantasy Cricket prediction, and dream11 Expert data. This League is called English T20 Blast 2021 in the dream11 app.

Nottinghamshire vs Hampshire, The Quater Final match will be played in Trent Bridge on 25 August 2021 at 11:30 PM.

NOT vs HAM Dream11 Prediction and Today Injury Update:

Nottinghamshire is a very strong side has won 9 game 3 game got washed out while loosing only 2 game.

Hampshire is very ordinary this season in t20s. They have played 14 game won 6 while loosing 5.

T Moores will keep for DER and bat 3-4 down but he is very experienced t20 player plays in various t20 leagues all around world. He has scored 139 runs in last 9 games.

B Ducket is very attacking player and can play at any position. He has been in good form. He has scored 209 runs in last 9 t20 games

A Hales is most unlucky player in England that he is not playing for National side. He has been consistent in this format all over world. He has scored 338 runs in last 10 games.

J Clarke is very consistent player for NOT. He has scored 283 runs in last 9 games. He has already scored hundred in this series.

P Trego is basically batsman who can also bowl spin. He is big name in Somerset but this year moved to NOT because of bad form. He has scored 83 runs in last 4 games.

J Vince will open inning for HAM with D Short both are experienced international players. Both got start 1st two games could not convert to big score. Vince scored 326 run last 9 game. He was brilliant in hundred and took his team to title.

D Short has been inconsistent getting start every game but could not convert to big score.

S Mullany is medium pacer can also score quick runs lower down but his recent number are not great.

S Patel is very good spinner and also handy batsman playing 5 down. He has picked 12 wickets in 10 games and scored 204 runs.

J Ball and L Fletcher will be the opening bowler for them. N Carter and C Harison will assist them.

NOT vs HAM Probable Playing 11:

Vice-Captain Choice: A Hlaes, B Ducket 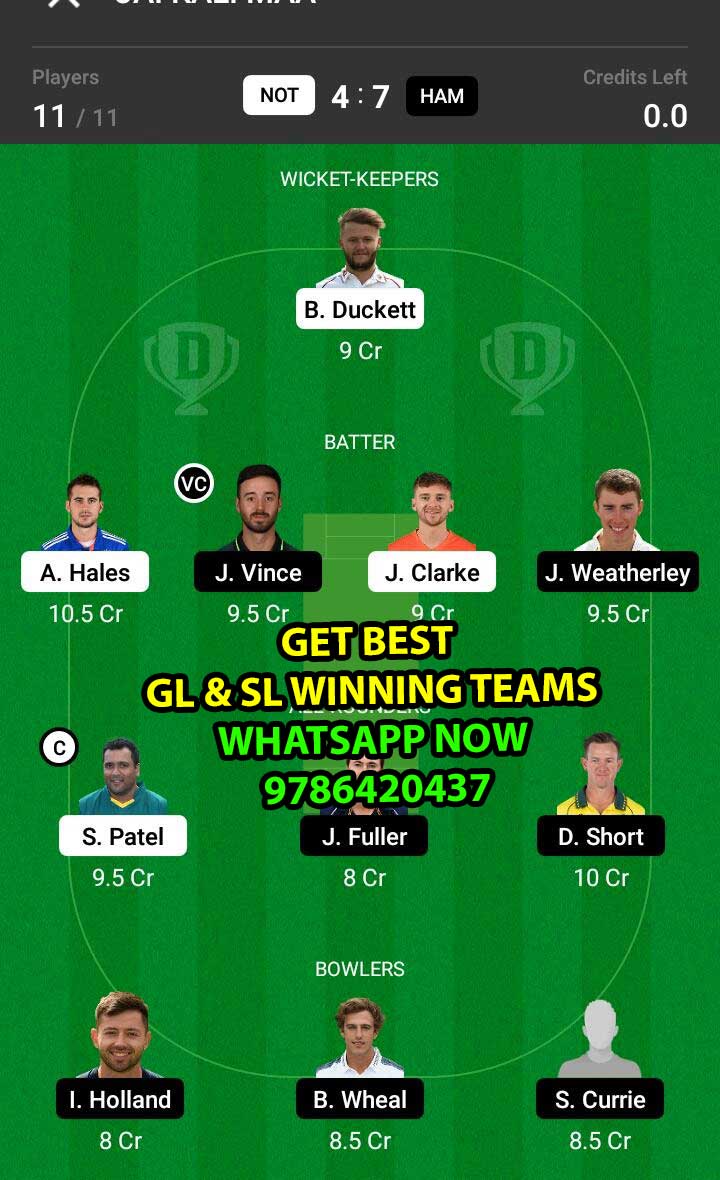