There’s a lot to take into consideration when you’re looking for the best MTA vs KHM dream11 team. Today, We are going to discuss MTA vs KHM Match news, MTA vs KHM fantasy Basketball prediction, and dream11 Expert data. This League is called EuroLeague 2020-21 in the dream11 app.

Maccabi Tel Aviv vs Khimki Moscow Region, The match will be played in Menora Mivtachim Arena on 6 April 2021 at 8:15 PM.

In the last game against the CSKA, Khimki lost by 25 points. CSKA was in control from the beginning and easily achieved their target. Mickey scored 16points and 7 rebounds defensively and made 6 steals offensively, while Karasev and McCollum added 15 and 14 points respectively. This sinks Khimki to 4-28 in this season so far.

Mickey and an Evgeny Voronov buzzer-beating three-pointer pulled Khimki back to 21-17 after ten minutes. Janis Strelnieks and McCollom traded triples and baskets were evenly exchanged over the next few minutes, before triples from Lundberg and Clyburn gave CSKA a 37-28 edge.

Finally they led the game with 25 points difference. Jordan Mickey was the player to watch out from defensive end and also from offensive end. Maccabi had also lost their game against Zvezda with a points difference of 12. Maccabi recovered in the first half, establishing a couple of double digit scores but sinks with fluent offense and defense in latter stages. Dorsey scored 14 points and Bryant added 12 points from the Maccabi. Dorsey is the player to watch out from this team and can see a upside, if Shved out from the Khimki team for this game.

MACCABI is stealing more from the opponents when compared to Khimki. So, we have to pick more stealers from Maccabi. Defensively and Offensively, both the teams are worst. We have to pick best forwards from the both sides, those who will grab more rebounds. 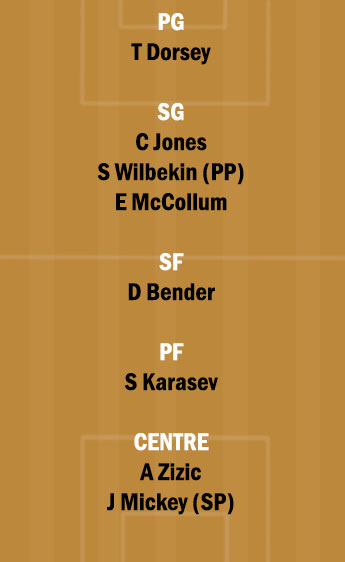