There’s a lot to take into consideration when you’re looking for the best MOS vs ZEN dream11 team. Today, We are going to discuss MOS vs ZEN Match news, MOS vs ZEN fantasy Basketball prediction, and dream11 Expert data. This League is called EuroLeague in the dream11 app.

CSKA Moscow vs Zenit St Petersburg, The match will be played in Sports Swimming Complex CSKA on 18 December 2020 at 10:30 PM.

Moscow are scoring more 3 pointers field goals than Zenit. In this season, Zenit are slightly ending Up With more Turnovers than Moscow, So it’s better picking best players from Zenit to avoid negative fantasy points.

Zenit are Performing well and dominating in Assists aspect in this season so far. Moscow allowing 78.1 points as an average to their opponents in this season. Where as, Zenit allowing 72.1 points as average. And that is the main advantage for Zenit to score more Points than Moscow. Moscow scoring good number of points and are slightly good at 2&3 pointers and in points scoring aspect too.

According To Recent and h2h match stats, Zenit are performing well and are slightly dominating in stealing aspect in this season so far, So we have to pick best stealers from Zenit as well as Moscow. Offensively And Defensively, Moscow are performing well and dominating than there opponents in this aspect in this season so far, So It’s Better To select Best Forwards From Moscow for balanced Team.

4. Only 1 match won by Zenit, and that to with less points difference in both matches.

6. According To H2H and recent results, Moscow are performing better than the Zenit. 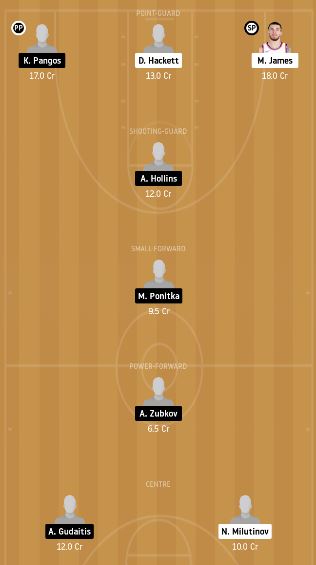